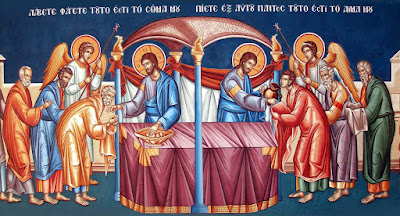 Saint Anastasios of Antioch responds as follows:
There are many people who, on account of their infrequent Communion, fall into sins. There are others who commune more frequently, and therefore greatly protect themselves from many evils, fearing the judgment of Holy Communion. Therefore, if we fall into some small, pardonable sins on account of our being human, either with our tongue, or our ears, or our eyes, and we fall as victims of deceit into vainglory, or sorrow, or anger, or some other like sin, let us condemn ourselves and confess to God. Then let us partake of the Holy Mysteries, believing that the reception of the divine Mysteries is unto remission of sins and purification. But if we also commit grave sins which are evil, carnal and impure, and we have rancor towards our brother, until we worthily repent of these sins, let us not boldly approach the divine Mysteries.
But because we are human beings, bearing flesh and weakness, and pollute ourselves with many sins, God has given us various sacrifices unto the remission of our sins. If we offer these sacrifices to Him, they purify us in order that we may approach the Mysteries. Merciful almsgiving is a sacrifice which cleanses man from sins. There is also another sacrifice which is unto salvation and the remission of sins, concerning which the Prophet David says, "A sacrifice unto God is a broken spirit; a heart that is broken and humbled God will not despise" (Ps. 50: 17).
If we offer these sacrifices to God, and if we have some faults on account of being human, we will be able to approach Holy Communion with fear, trembling, and compunction, just as the woman with the issue of blood drew near to Christ, weeping and trembling (cf. Mk. 5:25-34; Lk. 8:43-48). There is sin which is unto death, there is sin which calls for the repentance we have described, and there is sin which requires bandaging [with a penance]. However, true repentance is able to heal all things. The person who approaches to partake of the Mysteries with fear, trembling, confession, and compunction receives forgiveness, while the person who communes without fear and with disdain receives punishment. Those who receive Communion disdainfully and unworthily not only do not receive forgiveness for their sins, but also are leapt at even more by the devil. But when Christians receive Communion with fear, not only are they sanctified, and do they receive forgiveness for their sins, but also is the devil driven far away from them.
From Questions 7; PG 89, 385C-389D.
Saint Nicholas Cabasilas, commenting on the words of the Divine Liturgy, "The Holy for the holy," says:
Those whom the priest calls holy are not only those who have attained perfection, but those who are also striving for it without having yet obtained it. Nothing prevents them from being sanctified by partaking of the Holy Mysteries, and from this point of view being saints.... The faithful are called saints because of the Holy Thing of which they partake, because of Him Whose body and blood they receive. Members of His body, flesh of His flesh and bone of His bone, as long as we remain united to Him and preserve our connection with Him, we live by holiness, drawing to ourselves, through the Holy Mysteries, the sanctity which comes from that Head and that Heart. But if we cut ourselves off, if we should separate ourselves from the unity of this most holy body, we partake of the Holy Mysteries in vain, for life cannot flow into dead and amputated limbs.
And what can cut off the members from this holy body? "It is your sins which have separated Me from you" (Is. 59:2), says God. Does all sin then bring death to man? No indeed, but mortal sin only; that is why it is called mortal. For according to St. John there are sins that are not mortal (cf. 1 Jn. 5:16-17). That is why Christians, if they have not committed such sins as would cut them off from Christ and bring death, are in no way prevented, when partaking of the Holy Mysteries, from receiving sanctification, not in name alone, but in fact, since they continue to be living members united to the Head.
From A Commentary on the Divine Liturgy, 36; PG 150, 448D-449B.
John at 12:51:00 PM
Share
‹
›
Home
View web version