The Silence of the Panagia 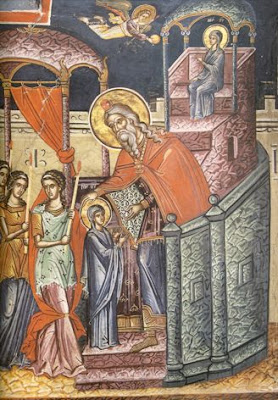 A homily delivered at the celebration of the feast of the Sacred Church of the Entrance of the Theotokos in Levadia during a Hierarchical Divine Liturgy, presided over by His Beatitude Archbishop Ieronymos of Athens and All Greece, on November 21, 2010.
By His Eminence Metropolitan Hierotheos
of Nafpaktos and Agiou Vlasiou
Every feast of the Mother of God is a cause of joy for the entire Church, and we celebrate it brilliantly, with hymns and doxologies, with a Divine Liturgy and litany, with words and silence, with pure thoughts and prayer of the heart. And this is because the Panagia is a gift of humanity to God as well as a gift of God to humanity and the entire world. She is "god after God, second place to the Holy Trinity," as we chant in a hymn.
This joy we feel on this day also with the feast of the Entrance of our Panagia into the Holy of Holies, a feast that shows the dedication of the Panagia to the Temple, her deification by grace and her essential preparation for the incarnation of the Son and Word of God. The Holy of Holies proved to be for the Theotokos a place of spiritual regeneration, a blessed and paradisaical place in which Adam and Eve lived after their creation. And the amazing thing is that Adam and Eve with their death-bearing disobedience to the will of God left this blessed place, while the Panagia with her life-bearing obedience, entered this paradisaical place, living in the Holy of Holies, like the first-formed prior to their disobedience.
This festal day is blessed for all of us. The city of Levadia is blessed, which celebrates this feast of the Mother of God. We are delighted to have with us His Beatitude Archbishop Ieronymos of Athens and All Greece. I consider myself honored that the always worthy Prelate of this Sacred Metropolis of Thebes and Levadia George, my beloved and chosen brother, commissioned me with this ministry of preaching, and I thank him from my heart.
The Panagia enters, therefore, the Holy of Holies and remains there in silence and prayer for twelve entire years and attains to deification, and this attracted God's love, in order to incarnate. The pre-incarnate Word of the Old Testament waited centuries for the right person to be His mother, and through her to enter humanity. So God Who is without a home built a home, through this blessed woman, the ever-virgin Mary.
The Panagia, according to Saint Nicholas Cabasilas, with the struggles throughout her life, but especially the grace of God, acquired in the Holy of Holies spiritual beauty, and in this way attracted God's eros towards humanity. This image of earthly erotic love is used here to show the beauty of the Panagia, as well as the eros of God towards humanity. Both beauty and eros were caused by the power of her inner life and not by the power of words and external activities. Besides, Christ reminded His listeners of the words of the Prophet Isaiah: "These people neither honor Me with their lips, and their hearts are far from Me" (Mk. 7:6).
The depth of the heart and what takes place there is what creates beauty and attracts God's eros. The greatest loves are internal and secret. Thus, as Saint Nicholas Cabasilas says elsewhere, the Panagia lived a "life that was all-immaculate, all-pure, refused all wickedness, exercised all virtues, had a soul purer than light, a body altogether spiritual,... a nous with wings that flew to the heights,... a soul that longed for divine eros." All these spiritual states of the Panagia attracted the Craftsman to earth and initiated His hand to recreate man. Thus, the human race was refashioned.
However, the inner beauty of the Panagia not only attracted God's eros, but He "eagerly desired the beauty" of the Panagia, and "He settled in her womb," according to the sacred hymnographer. According to Saint Gregory Palamas, God "longed for the secret beauty of her ever-virginity ... and He bent the heavens to descend." She also showed human nature to be beautiful. This is why Saint Nicholas Cabasilas says that her beauty and completeness proved human nature also beautiful. In this sense Saint John of Damascus sings to the Panagia: "O, daughter worthy of God, the beauty of human nature." 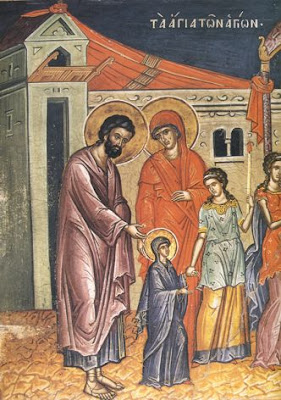