The Wonderworking Icon of the Holy Trinity in Rodopolis 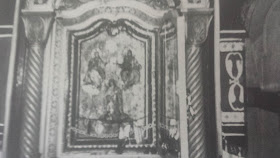 The persecution against holy icons from the time of iconoclasm is well known. During the Turkish occupation there was another persecution against holy icons by the unbelieving Turks. This is what happened to the holy icon of the Holy Trinity, which a Turk struck with an ax in Smyrna, but after seeing that it could not be damaged, he threw it in the sea and it was taken by the waves.
After an unknown number of years there was a sailor out at sea who was shipwrecked. In danger of drowning by the waves, he supplicated God to save him and, O the miracle, the wooden icon of the Holy Trinity appeared before him, upside down, and for this reason he merely considered it a plank of wood, on which he was able to support himself until he got to dry land.
When he arrived on land he turned around the plank of his salvation, and on the other side he saw it was an icon of the Holy Trinity. Amazed, the sailor took the holy icon with him, until he arrived in Athens, and he kept it in his home. Before he died, he told his wife to bring it to a church to dedicate the holy icon. So when the Church of Saint Makrina in the Sacred Hesychasterion of Panagia Faneromeni in Rodopolis of Athens was completed, the holy icon was gifted in 1975. The spouse of the man who discovered the holy icon brought it herself with tears and placed it in the Sacred Hesychasterion.
Since that time the icon is reverently kept in its own veneration stand and is celebrated on the Feast of the Holy Trinity, the day after Pentecost.
John at 10:35:00 AM
Share
‹
›
Home
View web version