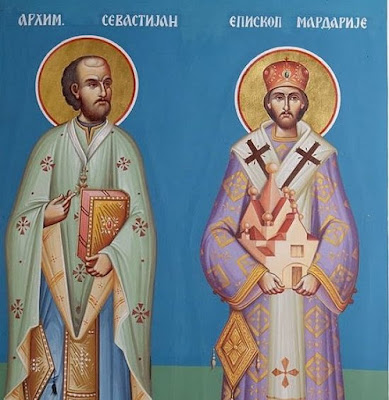 The Holy Assembly of Hierarchs of the Serbian Orthodox Church during its regular session on May 29, 2015, added the names of Archimandrite Sebastian (Dabovich) and Bishop Mardarije (Uskokovic), clergymen and preachers of the Gospel, God-pleasing servants of the holy life, and inspirers of many missionaries, to the Dyptich of Saints (Calendar of Saints) of the Orthodox Church, reports the website of the Western Diocese of the Serbian Church in America.
The Holy Assembly took this action at the recommendation of the Episcopal Council of the Serbian Orthodox Church in North and South America.
The Holy Assembly has established that the permanent annual commemoration of the Holy Hierarch Mardarije be on December 12, and Father Sebastian on November 30, on which days the Divine Liturgy will be served and the service chanted (hymns, troparion, and kontakion), and that their icons be piously venerated.
Soon this holy act of the Assembly will be announced to other Orthodox Churches throughout Ecumene (the inhabited world).
Adding the names of the Holy Mardarije of Libertyville and Holy Sebastian of Jackson is a great event of our Church.
On the same day, the Holy Assembly celebrated the memory of the Holy New-Martyrs who suffered in Prebilovac (Herzegovina).
Source
John at 2:11:00 PM
Share
‹
›
Home
View web version