Verses
Five sensible maidens long after God the Word,
The five Virgins having foreshadowed you.
These five lilies among the thorns of paganism, the virgins Martha, Mary, Kyria (Kyra), Vareria (Valeria) and Marcia were born in Caesarea of Palestine. They learned of the Christian Faith from a certain man whose identity is unknown to us. Having utterly forsaken the folly of idolatry, all five embraced the Faith and received Holy Baptism. After this, they dedicated themselves as brides of the incorrupt and pre-eternal Word, daughters of the unoriginate Father and chosen vessels of the Holy Spirit. Therefore, these pure doves resolved to abide together in one house. They lived a quiet and pious life, occupying themselves with fasting, prayer and vigils. They dwelt in silence that they may hear the word of God in their hearts. In their prayers they would supplicate God to reveal fully to the world the deception of idolatry and to spread the belief of Christians and enlighten the world.
Although the blessed virgins lived a secluded life, proclaiming the peace of God, they were brought to the attention of the governor of Caesarea. Therefore they were summoned before him for examination. At the tribunal they openly declared: "We know no other God but You, O Christ. The beauty of the corruptible world we count but dung. Wherefore, accept us into Your eternal mansions." The governor realized that all his efforts to persuade them to sacrifice to the idols were useless, and he had them terribly tortured. Their members were surrendered to mutilation and their youthful bodies to slaughter. But they endured these bodily torments as though they had no bodies, and exclaimed: "Let us bless the unoriginate Father and the co-unoriginate Son, and let us glorify the Spirit, the Comforter, equally enthroned with Them!" The blessed sufferers then cried out: "O hades, where is your victory? O death, where is your sting? Christ God helps us. We can do all things through Christ Who strengthens us." 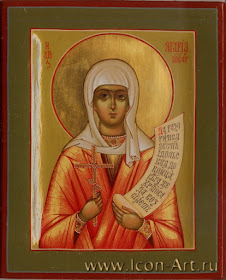 The ancient prophecy of Joel was also fulfilled in these virgins, for the Spirit had been abundantly poured out upon these handmaids of God; for they showed forth the weak as mighty and virgins stronger than men, unconquered by torments. They would say with the apostle: "If our outer man perish amid torments, yet our inner man is renewed. O Savior, grant us to suffer with You: receive us now in Your Kingdom, as You did the wise thief!"
It was decided that they were to be delivered up to the sword, and then they prayed: "O immortal King, accept our lives as coins of tribute, and the offering of our souls as sacred shekels unto You, our God and Master!" Thus they bowed their pure necks beneath the sword, and like rational ewe lambs, they were sacrificed unto God in their members. Indeed, as dowries to Him did they offer their lives and by transient sufferings they purchased eternal bliss!
From The Lives of the Saints of the Holy Land and Sinai Desert (Holy Apostles Convent, Buena Vista, CO 1990) pp. 281-282.
John at 9:16:00 AM
Share
‹
›
Home
View web version