Verses
Alexander and Antonina found,
The pit to be a ship that brought them to luxury.
On the tenth the fate of Antonina was to be burned in fire covered in pitch.
Saint Antonina was a modest and holy woman from the village of Kardamos (or Krodamos), adorned with outer and inner beauty. Arrested for being a Christian in 313, she was brought before Governor Festos, who was unable to persuade her to renounce Christ and worship the idols of demons. Rather, she invited the governor to repent and accept Christ. Seeing that Antonina was modest and strongly held to her virginity, the Governor forced her to enter a house of prostitution, where she remained for three days in fasting and prayer.
Then, during the night, a heavenly light appeared to her and there was an earthquake. Whereupon, the doors of the brothel were opened to her, and a voice from heaven exhorted her to rise and eat bread. After the maiden requested bread and ate, the other women of the brothel sent her away out of fear following the earthquake. Being brought before the governor, who again was unable to convince her to sacrifice to idols, she was cast to the ground and beaten with broad wooden blades. She was then sent to another brothel.
There was a young Christian named Alexander who received a revelation through a divine angel to go to the brothel. Being twenty-eight years old, it was assumed he entered the brothel to fulfill his lusts and commit a shameful act. However, he went straight for Antonina, gave her his cloak, and secretly told her to go outside, covering her head with his cloak. Meanwhile, he remained inside the brothel.
Within a short time it was realized Antonina was missing from the brothel, since certain soldiers came to dishonor the holy virgin, and they found Alexander in her place. They questioned Alexander why he played them false, and Alexander did not deny his actions, but confessed it. For this they thrashed him with broad wooden blades.
The soldiers apprehended Antonina as well by order of the governor, and they severed both of their hands and feet. Then the pagans smeared them with pitch and cast them into a fiery pit. Thus the two blessed martyrs received the crowns of martyrdom from the Lord.
Their joint commemoration was celebrated in the Monastery of Maximinos in Constantinople, where their honorable and wonderworking relics were located. 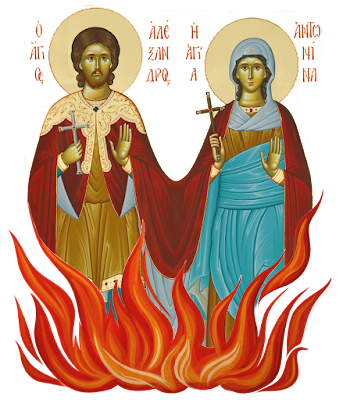 Apolytikion in the First Tone
Let us praise the two holy Martyrs, renowned Alexander and noble Antonina; in their holy contests they shone with love, faith and healing, for those who cry out together: Glory to Him Who has strengthened you; glory to Him Who has crowned you; glory to Him Who through you works healings for all.
Kontakion in the Second Tone
Let us bless godly-minded Alexander and Antonina, the spiritual kinsmen in Christ, who were of one mind in the paths of godliness; for in His good pleasure, He that glorified them hath received their struggles and wounds as fragrant myrrh.
John at 9:29:00 AM
Share
‹
›
Home
View web version