Saint Savvas was born in Stageira towards the end of the eighteenth century. Out of love for the monastic way of life, he departed for Konstamonitou Monastery in Mount Athos, where he lived in asceticism as a monk. The reasoning behind going to this Monastery most likely had to do with its close relationship to Stageira in Halkidiki.
In this Monastery, which is dedicated to the Protomartyr and Archdeacon Stephen, Saint Savvas dedicated his life devoting himself to virtue and piety, thus preparing himself for the crown of martyrdom.
Saint Savvas lived during the time of the revolution of Halkidiki in 1821, when he was called to follow the path of martyrdom. The only source of his martyrdom is Monk Dositheos from Konstamonitou whose origins were in Lesvos, in his book titled "New Memorial of the Newly-Appeared Hieromartyrs and Venerable Martyrs, the Brilliant Athonite Venerable Fathers, Who Were Killed During the Greek Revolution Under the Ottomans."
Let us see how Dositheos describes the martyric end of Saint Savvas:
"And now brethren, let us proceed to the simple Savvas the Stageiritis, who foreknew his blessed death and the way it would take place, because having departed the Coenobium, and was sent out to Ierissos by the Fathers, and he said to a brother of the Coenobium who was his friend what would take place in the future.
He saw, in a vision of the night, that persecuted by enemies they killed him. And it appeared to the blessed one, that his soul flew to the heavens, while his body was on earth. He became convicted of this truth of his foreknowledge and foresight after the vision. Therefore passing by the revered Zographou Monastery, the blessed one was killed by the impious together with another secular man, a servant of the Monastery, both also being from Stageira. And in this way came about their blessed repose."
This is how the Holy Venerable Martyr Savvas the Stageiritis was martyred and received the unfading crown of the glory of God.
The first icon of the Saint was painted by the iconographer Christos Karapalis, and his service was composed by the hymnographer Haralambos Bousias.
The first feast in his honor took place in 1988 when a parish received the first icon of the Saint, and it was attended by Metropolitan Nikodemos of Ierissos. 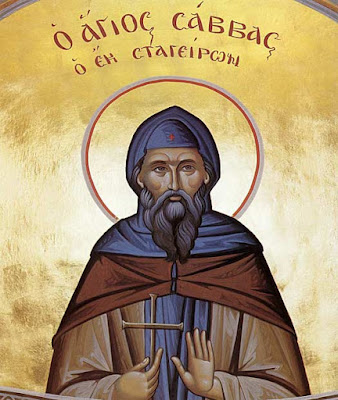 Apolytikion in the First Tone
The boast of Stageira and the pride of Athos, let us praise with odes Hieromartyr Savvas; strongly he lived in asceticism and contested, he defeated the treacherous enemy, and through a vision he was made worthy of the divine voice foretelling his martyrdom. Glory to Christ Who glorified you, Glory to Him Who gave you strength, Glory to Him Who in these latter days crowned you.
Source: Translated by John Sanidopoulos.
John at 11:50:00 AM
Share
‹
›
Home
View web version