Saint Peter the Prince of the Golden Horde and the Appearance of Sts. Peter and Paul

During the time that Russia was under the yoke of the Golden Horde, Bishop Cyril (Kirill) of Rostov traveled to the Horde, to Khan Berkay, to speak on behalf of the work of the Rostov Diocese. The Khan listened with considerable interest to the bishop, who told of the spiritual struggles pursued by Rostov’s enlighteners, of Leonty, the first of those teachers, who had come to baptize an alien and cruel people, and told of how ever since miracles had been happening over the relics of the great Righteous One. To this day, no one knows whether Berkay believed in the miracles described by the eloquent bishop. However, some time later, the Khan summoned the bishop and ordered him to heal his ailing son. Before leaving Rostov, the bishop had served a Moleben at St. Leonty’s reliquary and he had taken the Holy Water [blessed at the Moleben] with him to the Horde. Having sprinkled the Khan’s son with Holy Water, and having read a prayer, the bishop addressed the Khan and said, “Your son will survive to become as powerful as you.” The child became well, and Berkay ordered that all of the tribute collected from Rostov go to the Dormition Cathedral in Rostov.
A nephew of the Khan witnessed the miraculous healing of his cousin, and then followed in the bishop’s footsteps while he was visiting the Horde. He attentively noted everything that happened, and often listened to his uncle’s conversations with Bishop Cyril. After Vladyka Cyril’s departure, the young boy would often seek out solitude. Going off by himself, he wondered, “Why do we believe in the sun, the moon and the stars, and in fire? They are after all not gods, but who is the true God?” He had heard from those in Bishop Cyril’s entourage about beautiful churches and marvelous icons, and about the beautiful sound of Orthodox prayer. How much the boy wanted to witness all that! He wanted to see for himself that miracles happen in this world. Growing up, he came to understand that his fate was inextricably tied to that of Russia and its people. And so, he came to Rus'. It seemed to the youth that he had finally returned to his homeland, a homeland he had once abandoned. Arriving in Rostov, the young man entered the Church of the Dormition of the Mother of God. It was there, in the quiet, and at the same time bright, holy place, that the youth’s heart became filled with faith, and as the chroniclers wrote of him, that “a new moon rose in the heart of the prince.” The youth asked Bishop Cyril to baptize him. However, the bishop could not immediately do so: he feared that Khan Berkay would take revenge against the Russian people. After the Khan’s death, and after discussions about the lost prince had come to an end in the Horde, the bishop baptized him. At his Baptism, the prince was given the name Peter.
Prince Peter lived in Bishop Peter’s home, and after his death, in the home of Bishop Ignaty. Peter studied Russian, acquainted himself with Christian customs, and frequently went hunting on the shores of Lake Nero. 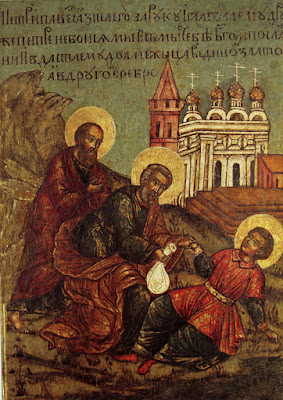 Why do Russian people venerate the Mongol who adopted the Orthodox Faith as a saint? The chronicles cast the greatest light on the life of Peter Ordynsky [i.e., of the Horde]. Thus, in one of the chronicles, we read that on falling asleep after hunting on the shores of Lake Nero, Tsarevitch Peter had an amazing dream: two people, from whom an unearthly light shone, awakened him and said, “Peter, your prayers have been heard, and your plea has gone up before God.” At first Peter was frightened. The men were much taller than human height, and were surrounded by a bright radiance. “Fear not, Peter, we have been sent to you by God. Take these two sacks from us. One contains silver, and the other, gold. In the morning, go into town and buy icons of the Most Holy Theotokos and of the Pre-eternal Infant and of the saints.” “Who are you?” asked the prince. “Peter and Paul, apostles of Christ,” they answered, and immediately disappeared. Then the prince heard a voice tell him to go to the bishop and say, “The Apostles Peter and Paul sent me to you, so that you would build a church in their honor on the place where I fell asleep.” That very night, the Apostles themselves appeared to Bishop Ignaty, and asked that a Church of the Holy Apostles Peter and Paul be established through the Prince of the Horde, to whom they had given a great deal of money to be invested in the Rostov Diocese. Awaking in amazement, the bishop summoned the prince and told him of his dream. At the same time, the prince appeared at the court, carrying three radiant icons in his arms. Going out to meet him, the bishop exclaimed, “So it was not a dream!” “It is true, Vladyka,” Peter quietly replied. 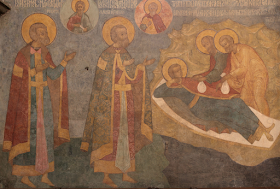 On the lake shore where the prince had had his dream, a Moleben was served, and an area was marked off for the church. Soon, a Church of the Preeminent Holy Apostles Peter and Paul, and a monastery appeared there. Prince Peter of the Golden Horde went out into public, and some time later, was married to the daughter of a leader of the Horde who had settled in Rostov. Peter Ordynsky remained in Russia, living in Rostov until his death; he outlived both Holy Hierarch Ignaty and Prince Boris of Nero.
Blessed Prince Peter Ordynsky died in 1280, departing to God, Who had called him from paganism to the light of the Orthodox Faith.
Source
John at 10:04:00 AM
Share
‹
›
Home
View web version