Is Divine Eros the Love for God? (St. Paisios the Athonite) 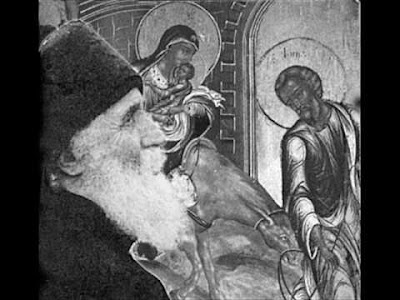 The following was asked of St. Paisios the Athonite (+ 1994):
- Elder, is divine eros the love for God?
- Divine eros is something superior to one’s love for God. It is a kind of madness. Love – eros – madness is along the same lines as envy – hatred – murder. A precise love towards God, with its sacrifices, simmers sweetly and slowly inside the heart; then, just like steam, divine eros bursts forth, since it cannot be contained, and unites with God.
Divine eros can soften even the toughest bones, to the point that a person can no longer stand upright, and so they fall down! They resemble a wax candle in a warm environment, which cannot stand firmly upright. It falls to one side, then it falls to the other side, you straighten it, but again it bends, and again it falls, because of the heat of the environment, which is too hot for it to bear. When a person is in such a state and they need to go somewhere or do something, they cannot. They will actually struggle to get out of this state.
- Elder, when someone is in a state of divine eros, and if they are in pain, can they feel that pain?
- If the pain is very intense, it is subdued and becomes tolerable. If the pain is minimal, it disappears altogether. Haven’t you seen how people who are in love with each other are entirely oblivious? They can hardly sleep. A monk once told me: “Elder, a brother of mine has fallen in love with a gypsy girl and is unable to sleep because of her. He keeps repeating her name, over and over again: 'My sweet Paraskevi, my sweet Pareskevi' he would say. Is he perhaps bewitched? I don't know! I have been a monk for so many years, and even I don’t feel that much love for the Panagia as my brother feels for that gypsy! I don’t feel my heart leaping like that!”
Unfortunately, there are spiritual people who are scandalized by the term “divine eros”. They haven’t perceived what “divine eros” means, and they are attempting to remove this term from the Menaion and the Paraklitiki texts, because they claim that it scandalizes. What have things come to! On the contrary, if you speak to secular people who have experienced worldly eros about divine eros, they immediately say: “That must be a far superior thing.” There have been so many youngsters who have experienced worldly eros, that when I mentioned divine eros to them they were able to make the comparison in their minds! I ask them: "Have you ever lost your footing, or were unable to do anything, on account of the love that you felt for someone?" They then immediately comprehend how this must be a really superior state, and we understand each other perfectly thereafter and are able to communicate. They usually respond with: “If we feel that way with worldly eros, imagine what that heavenly feeling must be like!”
- How can one become crazy, Elder, by love for God?
- Well, by keeping company with other crazy ones, who will infect you with their spiritual craziness! I will pray to one day see you as a complete madman for God! Amen.
I too have had a small experience of spiritual madness, which comes from divine eros. In that state, a person reaches the stage of divine absentmindedness, and does not want to think of anything else except God, the divine, the spiritual, the heavenly. Being passionately in love with the divine, you feel ablaze internally, there's a sweetness, and you explode externally in a crazy manner - within the divine confines of modesty – and you glorify God the Maker like an angel, day and night.
- Is that what we call ecstasy, Elder?
- Yes. That is when a person is outside of themselves, in the good sense. That is also what we mean by ”stand aside and shudder, O heavens” (έκστηθι φρίττων ουρανέ) [from the Eirmos of the 8th Ode of the Canon of Easter Saturday].
Divine madness takes a person beyond the earth’s pull; it lifts them up to the throne of God, and makes that person feel like a puppy at his master’s feet, licking his feet joyfully and with reverence.
Source: Counsels of Elder Paisios of the Holy Mountain, vol.5, pp. 205-206. Translation by John Sanidopoulos.
John at 7:23:00 PM
Share
‹
›
Home
View web version