...continued from part one.
Hieromonk Eustratios of Trebizond became a monk at eight years of age in Soumela Monastery in Pontus. After twenty years there he was ordained a priest, and after visiting Jerusalem he came to the Holy Mountain to the Skete of Kavsokalyva. His typikon was as follows: three thousand prostrations every night and the prayer unceasingly. This typikon he followed throughout his life. The cave in which he lived looked like a tomb, dark and closed, in order to lengthen the night which fosters prayer. He would sleep one hour a day, practically standing. Daily he would liturgize. Continuously he would fast. To one of his disciples, who lived beside him, but in another place, he said prior to his death, how God had given him such prayer, that even while sleeping his heart would pray. The Elder would pray either while sitting or standing, leaning his head slightly towards his chest, and would softly utter with contrition and attention the prayer, fixing his mind on the words of the prayer while holding his breath, in order to harmonize it with the movement of his mind. He was adorned with the gift of insight. While praying he would hold a large handkerchief, for his many heartfelt tears, and he would be found in a state of spiritual ascent.
A great laborer of noetic prayer was Elder Barnabas Agiovasileiatis (+ 1905). His vigils would last throughout the night and they were frequent, only with a prayer rope. An even greater man of violence was his elder named Nathaniel. In his advice to a monk who lived in hesychasm alone, among other greats, he writes: "When the prayer is active, there comes tears, joy, movement and renewal of the heart. But if you don't have it, by no means despise it, but with simplicity say: 'Lord Jesus Christ...' since God is illumination... When you sit doing the prayer and your mind drifts off and are unable to do the prayer, get up from your seat and do not be sad that you weren't able to do the prayer, but you should be happy. If again the evil spirit ties you up and you are not able to do the prayer at all, do another spiritual work, and if you are not able then do a physical obligation, and be careful with yourself and never be overwhelmed, but always be happy and never sad, because all the saints walked in meekness. Read and continue as I said and so your day will pass without even knowing."
Another great fighter was the elder of the famous Papa Savvas the Spiritual Father of Little Saint Anna's (+ 1908), Elder Hilarion the Gkourtzis (+ 1864), who from a young age was an ascetic in his homeland of Georgia. In the Holy Mountain he lived in Iveron and Dionysiou Monasteries and in the wilderness. Many caves became his habitation. He would irrigate the rocks with tears and strictly observed silence. He had many demonic attacks, but these left him undeterred. His prayer worked wonders. The long fasts would leave him half dead. He very much loved quietude and unceasing prayer, and with the blessing of his spiritual father he lived as a recluse for a long time. In his old age he would use chains as hangers to support him during his many-houred vigils. His final words were: "Glory to God! I wanted a martyric death, but the Lord didn't make me worthy. Yet He sent me sickness, which can be greater than martyrdom, if it is endured with patience and faith in the divine will." After his exhumation his relics were fragrant.

Saint Antipas of Moldavia (+ 1882) from a young age would have divine experiences during prayer and so he decided to become a monk, enduring great and many temptations. With the advice of holy elders and various ascetic pains he systematically cultivated noetic prayer. For three years he lived in Esphigmenou Monastery and then retired into the deep wilderness. He had a special love for the Panagia, as all hesychasts do. His zeal was always prudent. The Athonite typikon was kept by him throughout his life even when he was away from the favored of Mount Athos. The fruit of his watchfulness was the sweetness he always had, as Saint Isaac the Syrian says. He loved solitude, quietude, silence and the prayer, even when he was in a metochion in the world. His decisions and movements prepared him for greater asceticism and prayer. Concluding his life in Barlaam Monastery he gave himself over completely to his love for prayer. This undistracted prayer was accompanied by thick and hot tears. Humility, self-reproach, patience and forbearance adorned and graced him. His only possession was an Athonite icon of the Panagia. He departed this life while praying to the Theotokos. 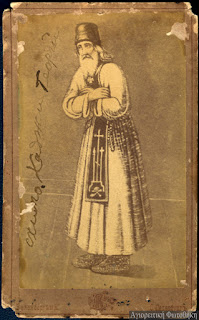 The famous ascetic Hatzi-George (+ 1886) from Cappadocia heartily loved asceticism and prayer from a young age, as well as the Most Holy Theotokos, who helped him very much. He first came to the Holy Mountain to Gregoriou Monastery. Later he went to the Skete of Kavsokalyva, under the empirical teaching of his compatriot spiritual father Neophytos (+ 1860), who gave him a rule to live in the Cave of Saint Nyphon. Then they went to Kerasia and established ongoing, perennial and strict fasting with completely oil-less food. Silence, obedience, starvation, the prayer, humility and love adorned him. To avoid chatter in his brotherhood, when they were all occupied together in some work, he would say the prayer loud. His life was a continuous Great Lent. Joyful-sorrow characterized him. The discreet love of Hatzi-George helped many. For medicine he had the Divine Mysteries. The fact that he never bathed, and had dirty and tattered clothes, were hidden by his pure heart, which loved watchfulness. He reposed as soon as he received the Immaculate Mysteries. 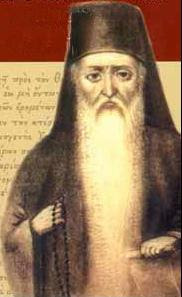 The blessed Papa Chariton the Spiritual Father (+ 1906) became a monk at Meteora, then he went to Sinai and after to the wilderness of the Holy Mountain. He would sleep a little on the stall, ate once a day, and oil was consumed only on the weekends. His beloved places were the caves of the saints in the area of Kavsokalyva. He was a hesychast, quiet, a lover of calmness, chaste, humble and studious. He was both a scholar and an imitator of the saints, a hymnographer and a writer of the lives of saints. He wrote: "Love vigils, fasting, tears, prayers and chants, and the study of the Scriptures, engendering a humble mind and peace, and reject insane arrogance, so as not to be conquered by envy and the passions, insobriety and the death of the soul." His battles with temptations were defeated by his invoking of the Panagia. He rarely came out of his cell towards the end of his life. Having a continuous memory of death, the remembrance of God, he departed for the one-way journey to the heavens, as he would write, while praying.
PART THREE
Translated by John Sanidopoulos.
John at 5:00:00 PM
Share
‹
›
Home
View web version