When St. Arsenios of Cappadocia Was Rescued by St. George 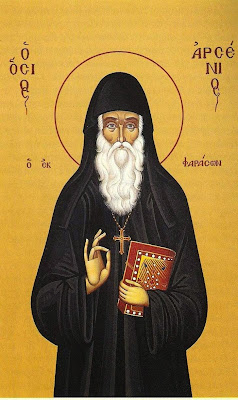 Saint Arsenios was born around 1840 in Farasa of Cappadocia. His virtuous parents, Eleutherios and Barbara, had two sons, Vlasios and Theodoros (St. Arsenios), who were left orphans at an early age, and were thus raised by their mother's sister.
The following story was recorded for us by his biographer, St. Paisios the Athonite, concerning an incident when Vlasios and Theodoros were young in age:
One day, Vlasios persuaded his younger brother Theodoros to go with him to a field which had belonged to their father, which lay close to a torrent called the Evkasis. As they were crossing this torrent, the water carried Theodoros away, and Vlasios, in tears, called on Saint George, whose chapel was close by. While Vlasios was crying and begging the Saint to help, because his conscience was bothering him, seeing as how he was the cause of his brother being in danger, he suddenly saw Theodoros next to him, joyfully telling him how a horseman, like a monk, had hauled him out of the water, set him on his horse and brought him out of the torrent. From then on, Theodoros maintained that he, too, was going to become a monk. In this way God saw to it that he should take the right path from an early age.
What happened had its effects on Vlasios, as well, who also gave himself to God, in his own way, glorifying Him as a teacher of Byzantine music. He later ended up in Constantinople.
From Saint Arsenios of Cappadocia by Monk Paisios of the Holy Mountain, pp. 45-46.