The Resurrection of Christ as an Historical and Existential Event 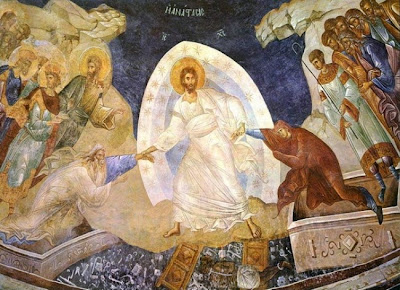 By Archimandrite Kyrillos Kostopoulos
These days the Orthodox clergy and people celebrate the Resurrection of the God-man Christ.
Saint Epiphanios exclaims: "Christ is risen, and is the resurrection of the fallen... Christ is risen, and joy has been bestowed upon all of creation" (PG 43, 465).
This event of the Resurrection is the strongest blow against the little faith that is produced by questionings, doubts and frustrations.
The Resurrection of the God-man Christ is confirmed by:
a) The empty tomb (Jn. 20:6-7).
b) The appearances of Christ to His Mother, to the Myrrhbearers, to Mary Magdalene, to the Apostle Peter, to Luke and Cleopa, in the Upper Room, to Doubting Thomas, to the five hundred people outside of His environment (1 Cor. 15), to James the Brother of God, to all of His Disciples on the Mount of Olives, and to the persecutor of Christians Saul who later became the fervent preacher of the Resurrection and the Apostle to the Nations Paul.
For this historical and empirical event there are objections derived from those trying to understand it with their finite and often impassioned logic.
However, it must be understood by all that the miracle of the Resurrection cannot be approached through the rationalism (rationalismus) of Thomas Aquinas, as a ratio, which means the conception (facultas) of the subject to identify and capture the "is" of beings and its overall existence. Moreover, neither is it possible for what is beyond intellect to be captured as an intellectual object.
People today, having as a tool their impassioned sound reason and the empirical example, try to break free from mythology and paganism and give substance to scientific thought and reason. But they have gone too far and reached the point where they have deified reason and science, removing themselves from the possibility of freely journeying to what is beyond reason and science and certainly from understanding the miracle of the Resurrection.
Only the person who operates with pure reason together with faith, as the acceptance of divine revelation, is able to understand and accept what exists above and beyond the finite human intellect.
Such a person has the ability to accept the Incarnate Word of God the Father as Crucified Love and simultaneously as Resurrection.
Belief in the Resurrection of the God-man was and remains the foundation of Christianity, because "if Christ has not been raised, then our preaching is in vain, and our faith is vain also" (1 Cor. 15:14).
In addition to this, however, for the Resurrection of our Lord Jesus Christ to be deeply understood, it must be experienced. And to make it an experience presupposes the removal from a person of their mental certainty and their "objective" knowledge of the Resurrection, and the admission in its place of the experience of it, which is a way of life, and this life is none other than ecclesiastical.
The teaching of the Resurrection of the God-man is preached, but it can also be experienced in our Holy Orthodox Church in the wealth of its worship experience in view of the eschatological joy of the Resurrection.
Within this Orthodox ecclesiastical life it is possible for the faithful Orthodox Christian to encounter their Risen Lord, to communicate with Him and experience the Resurrection existentially.
Source: From the newspaper Πελοπόννησος 05/04/2013. Translated by John Sanidopoulos.
John at 12:03:00 PM
Share
‹
›
Home
View web version