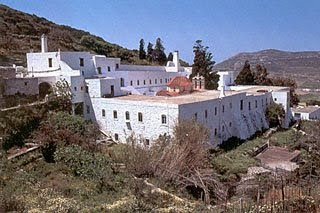 On the road between Paroikia and Naousa on the island of Paros is the male Holy Monastery of the Life-Giving Spring of Longovarda, one of the most important monasteries in 19th and 20th century Greece, especially when the late holy Elder Philotheos Zervakos was its Abbot for many decades until his repose in 1980.
The Monastery was founded in 1638 by the elected official of Naousa, Christopher Palaiologos. In 1652 Longovarda Monastery became Patriarchal and Stavropegic. The Katholikon was built in 1657. It went through some tough trials, so that from between 1800 and 1825 it was deserted and abandoned. But divine providence presented new founders: Philotheos Georgiou and Hierotheos Ioanou, together with the nephews of the latter named Philotheos and Hierotheos Vosyniotis, who were brothers from Peloponnesos. This period of Longovarda Monastery (1825-1930) is known as its "golden age", when the saintly and wise anchorites from the Holy Monastery of Zoodochos Pege in Poros, Philotheos and Hierotheos, reestablished the Monastery and served as its Abbot. 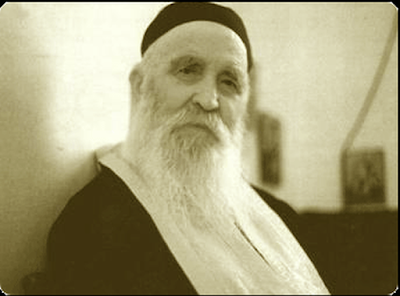 The next great period of the Longovarda Monastery (1930-1980) is encompassed by the presence and acts of its leading Abbot, Father Philotheos Zervakos. In January of 1930, Father Philotheos became Abbot of the Monastery. Regarding this event, the philologist and writer Nikolaos Aliprantis, a native of Paros, says in his book The Holy Cenobitic Monastery of Zoodochos Pege of Longovarda on Paros:
"After the repose of Abbot Hierotheos II Vosyniotis on January 13, 1930, the reins of governing the Holy Monastery were taken over worthily by Archimandrite Philotheos Zervakos at the age of 46.... In the previous years he had served as the right hand of Hierotheos, and had already acquired the reputation of a saint. As the Gymnasiarch Emmanuel Sagriotis remarks in his book The History of Longavarda, 'he was rich in every virtue, characterized by extreme humility, very learned, and in every respect praiseworthy. Already the virtues which adorned him had become manifest: genuine piety, unshakeable faith in God and hope on Him, self-mastery, love of labor, zeal towards the divine traditions, devotion to the work of the Monastery, distinctive power in confessing and teaching the word of God, and above all humility.... All these virtues and many others the Elder retained without diminution, and increased in the years that followed.'"
The venerable elder Philotheos Zervakos was distinguished for his spiritual and philanthropic works, and he is one of Orthodoxy's major figures in 20th century Greece. He helped many children of poor families in Paros to get an education. During the German Occupation, he helped the resistance and protected the allies, and it was he who saved 125 hostages from being executed, mediating sacrificially to the German commander. Every year, on June 23rd, the Monastery celebrates the memory of this event, when through the mediation of the holy elder Philotheos Zervakos, the Panagia prevented the execution of 125 young hostages in Paros in retaliation for sabotaging the German airport. Also, at his instigation, monks from the Monastery fought in Albania. 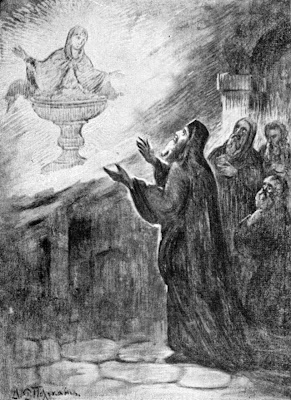 The main celebration of the Monastery takes place on the Friday of Renewal Week, when the Panagia of the Life-Giving Spring is celebrated.
Today the Abbot of Longavarda Monastery, since 2001, is Archimandrite Chrysostomos Pichos and the Monastery has about ten monks. Visitors should be aware that it is avaton, which means that females are not allowed to visit the Monastery.
Source: Translated by John Sanidopoulos. 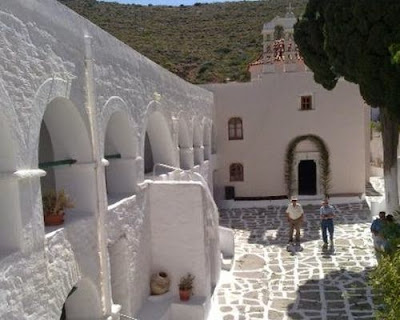 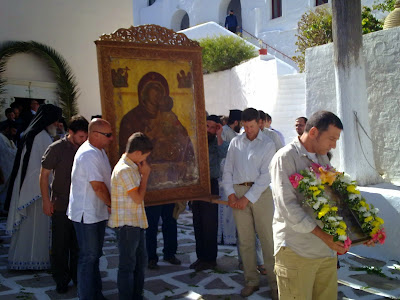 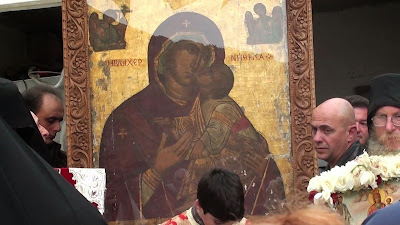 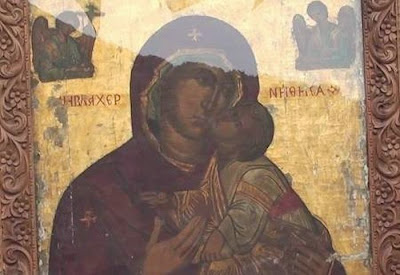