Saint Savvas the Vimataris and the Miracle of Panagia Vimatarissa

Around the year 910 A.D. (others say 892) an army of countless Arabs from Syria conquered Crete and Sicily and all the Greek Islands. Some of them came to the Monastery of Vatopaidi, on the eastern coast of the Holy Mountain (Mount Athos), to raid it. When the Caretaker of the Holy Altar (Vimataris) of the main church (Katholikon), Hierodeacon Savvas, saw them coming, he took the Holy Cross which belonged to Saint Constantine the Great together with the honorable and wonderworking icon of the Panagia Ktitorissa, and hid them in a shallow well under the Holy Altar and lit an oil lamp in front of them. He then skillfully camouflaged the well with stones and branches and ran into the woods to hide. However, the invaders caught up with him, took him and many others prisoners, and sent them to Crete, after looting the Monastery.
The other monks were away at various chapels scattered around the Monastery when this thing happened. When they returned and they saw the Monastery in ruins, they were extremely upset, but they stayed there until three brothers, Athanasios, Nicholas and Anthony came from Adrianople (972) with three thousand gold florins (flouria) each to become monks. They rebuilt the Monastery and it started to flourish again. 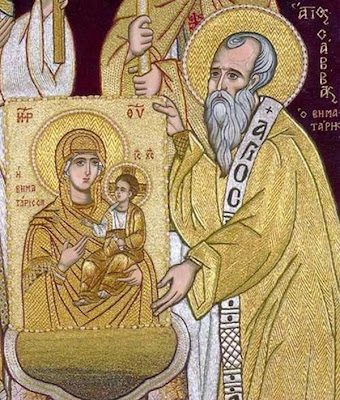 When Nikephoros Phokas, who built the Great Lavra of Mount Athos, became Byzantine Emperor (963-969), he amassed a large army, liberated Crete and freed the captives, including Hierodeacon Savvas the Vimataris of Vatopaidi, who returned after seventy years to his Monastery on the Holy Mountain. However, he could not recognize any of the monks, since they were all new. Nonetheless he told them a story of how he hid the icon of Panagia Ktitorissa, and the Cross of Saint Constantine in the well. He opened it and to their surprise they saw the Icon and the Cross standing on the water, and the oil lamp in front of them still burning after all these years!
Amazed, took them out of the well and placed them at their original place, repeating "Lord have mercy". Since then, every Monday evening after Vespers, a Supplication Service is chanted to the Theotokos, and on every Tuesday a Divine Liturgy is celebrated in the main church. The fact that these services have been going on for a millenium is evidence of the truthfulness of the event.
Hierodeacon Savvas the Vimataris, who placed the Icon and Cross in the well, returned to his position as deacon and after a few days departed this earth for the heavenly Kingdom in peace. 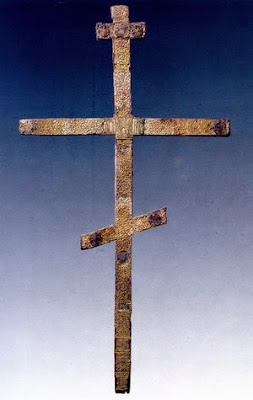 The icon of Panagia Ktitorissa is found today in the main church on the upper throne, and the Cross of Saint Constantine, as is the custom, is behind the Holy Altar. The icon of Panagia Ktitorissa ("Foundress") is also known as “Vimatarissa”, and may have something to do with the original founding of the Monastery. Till this day a vigil lamp burns ceaselessly before this icon to the right. As for the Cross, it is said to have been constructed according to the form seen miraculously by Saint Constantine in the sky before his battle at the Milvian Bridge. The location of the well can be found to the right of the Beautiful Gate of the Holy Altar, covered by a plate over which is a cabinet that contains vestments.
On the Tuesday after Pascha each year, a procession of the Holy Icon is done around the Monastery in honor of Panagia Vimatarissa, which is celebrated on that day together with Saint Savvas the Vimataris. 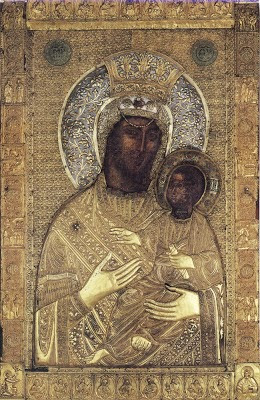 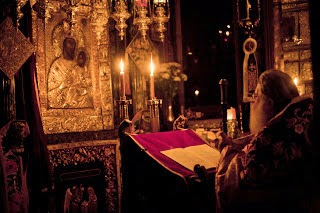 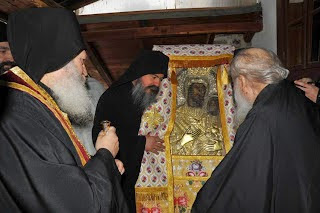 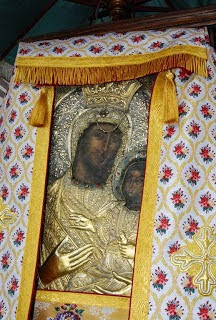