We do not have much information on the life of Saint Leontios. The main sources are the few biographical accounts in the Codex of the Sacred Monastery of the Honorable Forerunner in Gortynia and Codex 163 of the Public Library of the School of Dimitsana. Many other things have been preserved through the oral tradition of the region.
Saint Leontios lived before 1770 A.D. (perhaps between 1650 - 1750). He came from the village of Stemnitsa in Gortynia and his surname was Pasomenos. As for his parents, the exact date of his birth, his childhood and his youth, we do not know anything. His monastic tonsuring probably took place in one of the many monasteries that flourished at that time in the area of Stemnitsa.
Information about his life becomes more specific when the Saint began his ascetic path to the top of Mount Kastania, which is perhaps the ancient mountain Cnacalus referred to by Pausanias, with an altitude of 1,200 meters, directly opposite the village of Vlacherna. The area of Vlacherna and the caves that adorn the surrounding mountains was a place of asceticism for anchorites.
In such a natural cave lived Saint Leontios. Over time he proceeded to open his cave and build a small monastery in honor of the Deposition of the Honorable Robe of the Theotokos. The reason behind this dedication was the presence of a sacred icon of Our Lady the Theotokos, on which is inscribed "Mother of God the Vlacherna".* The present name of the village takes its name from this icon, and so it went from being called Bezenikos and was renamed Vlacherna. This icon of the Theotokos was hidden beneath the cell of Saint Leontios in a small crypt of the rock so as to remain protected and not fall into the profane hands of the Turks. The icon was found miraculously after the liberation from the Turks.
In this cave, under the protection of the Theotokos, Saint Leontios lived for years in isolation and dedicated to prayer and asceticism. At the same time he did not overlook to offer spiritual benefit to local residents and all those who passed through.
An example of his love and philanthropy is the following:
The village was a passing for those travelling from Tripoli to Kalavryta and Pyrgos. The road was paved like the thoroughfare that connects Tripoli with Vlacherna today and continues from Kalavryta to Pyrgos. At the section of the road near Vlacherna there was no water for travellers to rest.
The Saint indicated the need for people to get some rest and have some refreshing water, so he carried water in a sack and placed it in a jar in the shade of a tree on the side of the road, which today is called "Dendros" ("Tree"). So travellers found a little rest while on their journey, especially during the hot summer months.
This ministry was not insignificant. The Saint had to travel a long way each time from the top of the mountain to the road to transport the water and then return back to the place of his asceticism. But through this ministry he combined his love for people with his love for God. Each time he would return, after having carried the water for the travellers, he would take the steep path to his hermitage while carrying a large stone, so that he always practiced bodily asceticism, and collected material for the reconstruction of the church in honor of the Theotokos of Vlacherna, and the construction of his grave.
Next to the hermitage and the church he built in honor of our Panagia, he built a small water tank and cultivated a garden for his needs.
To reward him for his struggle and willingness, our Lord Jesus Christ, who followed him and ministered to him throughout his life, gave him the grace to foreknow the time of his death.
It was Holy and Great Saturday when Saint Leontios became ill, and a friend of his who was a shepherd in the region wanted to visit him and offer him some milk to relieve him. The Saint, however, did not have an empty container to hold the milk, so he told the shepherd to come the next day to get his container and simultaneously gave instructions for his burial in the cave which he had built.
The next day, Pascha Sunday, when the shepherd returned to get his container he found the Saint reposed and understood that the Saint had previously announced this to him. 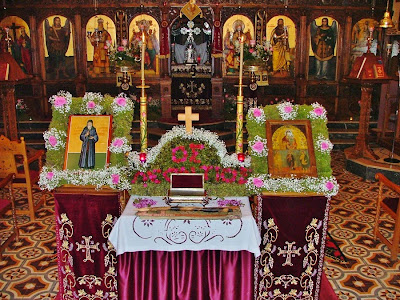 The tomb of the Saint is extant today and is rectangular parallelepiped in shape, the roof is vaulted, with a small hole in the middle. The staff of the Saint was also there, half of which remains there, while the other half together with a small portion of his sacred relics is in the Sacred Church of Saint Athanasios in Vlacherna, which are displayed for veneration.
According to the Codex of the Sacred Monastery of the Honorable Forerunner in Gortynia, which is the most authoritative source for the life of Saint Leontios, we learn that "after about a year the villagers with the shepherd uncovered the relic of the Saint and found it dissolved and permeating a fragrance." This was a sign of holiness, honor and reward from God to the Saint for his struggles and venerable life.
Tradition preserves that a certain shepherd from the village of Saint Leontios, at the urging of the Saint, was pastoring the goats of John Katsoulis near the foothills of the mountain of the Saint, and from there brought the sacred relics of the Saint to Stemnitsa and specifically the Sacred Monastery of Saint Demetrios.
In 1779 Albanians went to Stemnitsa and burned several houses, as well as the Sacred Monastery of Saint Demetrios, and after finding the skull of Saint Leontios they sold it to Christians in Preveza.
One of the miracles of the Saint, preserved by tradition, took place at the goat pen mentioned above. The shepherd found that the milk of a certain goat gave off a fragrance. He followed the animal to see where it grazed and saw that it would enter the cave of the Saint and would eat grass that grew at the grave of the Saint. The next day the grass would grow back over the grave.
The Codex of the Sacred Monastery of the Honorable Forerunner in Gortynia preserves another miracle. Near the Sacred Monastery of Saint Demetrios heavy rain and hail broke out, which lasted several days, creating huge problems and changing the landscape with torrents. The monks despaired of the natural disaster, so they raised up the skull of Saint Leontios to heaven and made supplication. Immediately the rain stopped and the region was saved from great disaster.
Saint Leontios is celebrated on Pascha Wednesday at the Sacred Monastery of the Panagia of Vlacherna on Mount Kastania.
* This was named after the wonderworking icon of the Mother of God that was in the famous Blachernae Church in Constantinople, which contained also the actual Robe of the Theotokos. 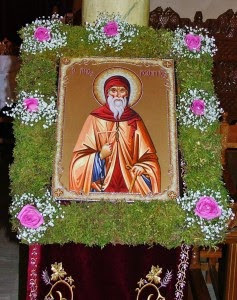 Apolytikion in the Fourth Tone
The offspring of Stemnitsa and the guardian of Vlacherna, we honor you, Venerable One; through the streams of tears and the pains of asceticism, you truly made the wilderness and the mountain to shine and you won the affection of Christ your divine desire. Therefore beseech Him, Leontios, that He may save our souls.
Source: Translated by John Sanidopoulos.
John at 5:52:00 PM
Share
‹
›
Home
View web version