Saint Alexandra the Empress of Rome, Wife of Emperor Diocletian

Christ's holy Martyr, Alexandra or Alexandria, was the wife of Emperor Diocletian (r. 284-305). Diocletian hailed from Dalmatia of the Adriatic coast of Yugoslavia. Like many low born Roman boys from the backward provinces, Diocletian pursued a career in the Roman army. When he came to power in 284, he made it his main purpose to stabilize and reform the empire. To this end, he created an absolute monarchy, with all power centering in himself as the semi-divine ruler. He made his palace a divine haven and his own person sacred. The Senate was permanently in a subordinate position.
He attempted to appear august when he donned gold and purple robes and a pearl diadem. All had to address him as "our Lord" (dominus noster). Those in his audience were required to prostrate themselves on the ground before him. In fact, he claimed divine honors, as the vicar of Jupiter Capitolinus. He guarded his "sacred majesty" with many circles of soldiers and eunuchs, and allowed no one to approach him except on bended knees, and with the forehead touching the ground, while he was seated on the throne in rich vestments from the far east.

As Augustus and Decius before him, Diocletian attempted to use the state religion as a unifying element in society. It happened that Diocletian consulted about some issue with the oracle at Apollo's temple. The demon that spoke through the idol complained that he could no longer accurately prophesy the future, since the just ones frustrated him. Diocletian, wishing to learn the identity of the "just", conferred with the pagan priests, who found them to be the Christians.
Thus, in 303, Diocletian issued a series of four increasingly cruel decrees designed to compel the Christians to participate in the imperial cult. He ordered the leveling of church buildings. Manuscripts of the Scriptures were burned and Christians were removed from high government offices. Bishops were imprisoned, and could only be released if they sacrificed before the idols. Indeed, everyone was required to offer sacrifice. Thus began the Great Persecution.
At that time, the brave and accomplished Saint George, the trophy-bearer from Cappadocia, was serving in the Roman army. The holy George would not comply with the emperor's mindless orders to destroy the Christians and their holy places, since he, too, was reared in Christian piety by his parents from childhood. The Saint, after he distributed his possessions among the needy, appeared before Diocletian. He charged the emperor with the unreasonable murders of the pious. The emperor, taken unawares that George was a Christian, sentenced him for insubordination.
His empress, Alexandra, was present when her husband ordered barbaric punishments upon the person of the holy George. She beheld when they placed a heavy stone upon his chest, and how the martyr bore all with quiet endurance. She saw the monstrous wheel, designed with iron spikes and hooks, to which the martyr's naked body was bound. The holy George underwent all silently. Afterwards when Saint George was released from that wicked contraption by an angel, his wounds were miraculously cured. Though Diocletian could scarce believe his eyes, Alexandra and the others knew that this was surely George renewed.
Now divine grace was able to enter Alexandra's heart when she realized the truth about the God of the Christians. As she advanced to profess Jesus before all, the eparch took her arm and detained her at the palace.

In the meantime, Diocletian commanded that his soldiers intern George in a stone pit used for quicklime. However, when the martyr survived the lime-pit unscathed and perfectly healthy, all were taken aback. Diocletian, unmoved, then ordered that the martyr be shod with iron shoes that were perforated with heated nails. After this inhuman torture, the Saint was confined to prison.
The following morning, when George appeared before the emperor, no trace of any wounds were found on his feet, leaving all dumbfounded at his wondrous recovery. The emperor then bid his executioners to thrash George with whips. Later, George was made to drink poison which roused the martyr to laugh. When George drank the fatal potion, he suffered no injury. Enraged and confounded, the emperor ascribed all of George's vulnerability to punishment as magic and sorcery.
The court magician then suggested that George's power be tested upon a dead man; that is, whether George could resurrect the deceased. By God's grace, when Saint George prayed, the dead man stood up alive in his grave. All were filled with terror and disbelief. Needing time to collect himself and consider the matter, Diocletian remanded George to prison.
Not much time passed, however, when Diocletian made George appear before him again. This time, however, he offered worldly power to Christ's athlete, saying, "I shall have you as my administrator, second in the realm, if you will turn to the gods." George answered by offering to enter into the temple of Apollo. The emperor, interpreting this answer as a victory, joyfully entered the temple with George. George then stood before the idol and made the sign of the honorable Cross.The wicked demon inhabiting the idol was then enjoined to confess that he was not a god. Moreover, the demon was made to acknowledge the God Whom George worshipped. George then rebuked the devil. Demons fled the idols, causing them to fall and smash upon the ground. The people then rained blows upon George and cried to the emperor to execute him.
The tremendous tumult that took place in the city was made known to the augusta. Now Alexandra had already confessed Christ in her heart and soul. She could no longer refrain from keeping her new faith a secret. She desired to make an open avowal.
Whereupon, she hastened to the temple of Apollo, seeking George. Unable to reach him from the press of the mob, she cried aloud, "O God of George, help me, for You only are the true God!" At length, the crowd calmed, and Diocletian ordered that George appear before him. The emperor, incensed, bellowed, "This is a token of your gratitude, O evil head? In this manner have you learned to sacrifice to the gods?" The Saint answered, "No, O mindless emperor, I learned to disdain the gods who are unable to save themselves from extinction." As the holy George spoke, Alexandra arrived and fell before the martyr's feet. She then thanked the Saint for ridiculing the idols. Sore astonished at his wife's words and actions, the emperor, unable to compose himself, said to his wife, "What has happened to you, Alexandra, that you follow this magician and renounced piety to the great gods?" The augusta answered, "O dull-witted, impious and lawless emperor, you are blind, benighted, in error and do not believe the truth; neither can you recognize that Christ is the true God." 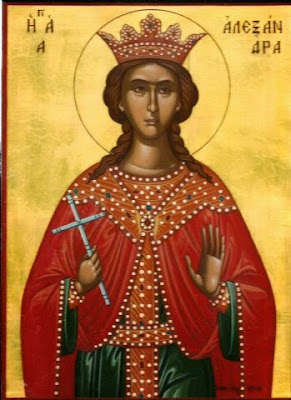 When the emperor heard his wife's rebuke and insult, he was at a loss how to proceed. However, from his rage or from his sorrow, he ordered that both George and Alexandra be imprisoned together. Diocletian then wrote this decision regarding the Saint and the augusta: "George, the Christian, who has despised my authority, insulted the gods, and destroyed the idols, I command to be beheaded together with Augusta Alexandra." Thus, their sentence was officially decreed.
While the augusta was in prison, she noetically glorified God. Then it happened that Alexandra began to grow quite weary, so that she had to sit upon a stone. In this manner then, she surrendered her holy soul unto God. This was witnessed by the great George, who glorified God.
Together with the augusta, in the prison, were three of her servants, whose names were Apollo, Isaakios and Kodratos. Their augusta's contempt and scorn for temporal rule and a mortal kingdom helped bring about their belief in Jesus Christ. Indeed, they, too, also were martyred for His love. They went before Diocletian and censured him as a law breaker and a beast. They criticized him for not even taking compassion on his spouse with whom he begat children. Incensed at their reproof, he had them cast into prison. That night, Diocletian pondered upon what manner of death to mete out upon those martyrs.
In the morning, he had them taken from prison. He ordered that Kodratos' head be struck off; but Apollo and Isaakios were returned to their cells. In prison, those faithful men neither ate or drank for many days. Thus, from hunger and thirst they surrendered their holy souls into the hands of God and received the crowns of the contest. These three Saints are commemorated with Saint Alexandra by the Holy Church on April 21st.

However, shortly after the repose of Saint Alexandra, the soldiers then took the Great Martyr George and escorted him outside the city. He eagerly went with them, hastening that he might soon enjoy the Desired One.
Arriving at the execution site, Saint George prayed aloud. He then bowed his head under the sword and received the reward of his labors. It was the 23rd of April, A.D. 304.
Diocletian, after twenty years in office, abdicated in 305, at the age of sixty. He retired to his palace on the Yugoslavian coast where his chief concern became the cultivation of cabbage. In 316, he died and went on to receive the eternal retribution he richly deserved.
From The Lives of the Holy Women Martrys, Holy Apostle's Convent, Buena Vista, CO, pp. 136-142.
John at 1:31:00 PM
Share
‹
›
Home
View web version