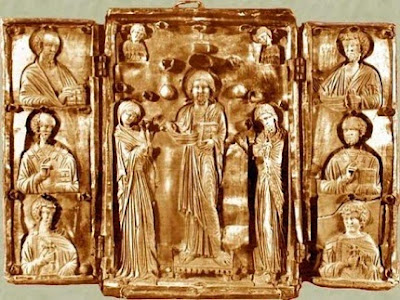 
Gori, a small town in eastern Georgia that became the epicentre for the 2008 Russia-Georgia war, is celebrating Okonoba, the day of the icon believed to be Gori’s patron.
This holiday is a big deal for the Gori population as they believed the ancient icon miraculously returned home after it went missing when an armed conflict broke out in Georgia’s breakaway Tskhinvali (South Ossetia) region in the 90s.
The Okoni Triptych, a unique and precious 11th century icon, was lost in the 90s but miraculously reappeared at Christie's, the world’s largest art business and a fine arts auction house in 2001. The initial price of the icon was $2 million USD and it was presented at Christie's in Geneva, Switzerland by a Russian citizen.
After lengthy negotiations between the Georgian and Swiss governments, Christie's Auction House and the Georgian Orthodox Church, the icon was finally handed to the Georgian side.
Scientists believe the three-panelled silver-bound ivory icon featuring the Virgin Mary, Jesus Christ and John the Baptist was made in the Byzantine Empire in the 11th century and brought to Georgia as the dowry of Queen Helen, the wife of Georgian King Bagrat IV and the niece of Byzantine Emperor Romanos Argyros. 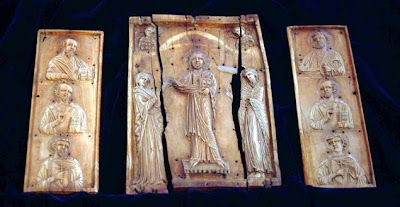 The icon was kept in Gori district in a church built upon the order of King Tamar of Georgia until 1924 when it was brought to the Tskhinvali Museum. The icon was stolen and smuggled out of Georgia after the armed conflict broke out in the Tskhinvali region.
Currently, the Okoni Triptych is kept among other items of the National Treasury of Georgia at Georgia’s National Museum in Tbilisi while a duplicate was created especially for Gori. Gori locals honor the icon every year on the Tuesday following Easter.
John at 2:55:00 PM
Share
‹
›
Home
View web version