Anastasia and Vasilissa the holy martyrs lived while Emperor Nero reigned (54-68). Hailing from the city of Rome, these wealthy matrons were of noble birth and mind. Both women were converted to Christianity through the teachings of the Apostles Peter and Paul, and became their disciples.
Saint Peter was arrested with a multitude of the faithful. Though Nero ordered the others to be decapitated, Peter was to be crucified on the Janiculum Hill. Nero was wroth with Peter for having converted two imperial concubines. Moreover, he held the Apostle responsible for the evil demise of his friend, Simon Magus [Acts 8:9].
The Apostle Peter requested that he be crucified head-downwards, saying, "I am not worthy to be crucified as my Christ, upright; for thus He was crucified, so as to look to the earth, where He descended into Hades to deliver the souls therein. Crucify me head down, that I may look to heaven, whither I shall go." The holy Peter endured great torment from the nails in his hands and feet, until he surrendered his blameless soul into the hands of God, on the 29th of June, c. 64. Thus, the beloved apostle of Jesus, the holy Peter, reposed, glorifying God in his death by the cross.
The Apostle Paul, however, was a Roman citizen. Therefore, it was forbidden, according to Roman law, that he should be dishonorably executed. He was sentenced to die by decapitation. When the divine Apostle's head was struck off, milk and blood flowed together from his wound. His execution was performed a short distance from the city, on the road to Ostia. 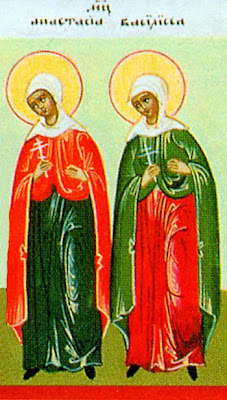 Under the cover of night, Anastasia and Vasilissa collected the apostles' relics and had them honorably buried. This activity did not pass unnoticed. The women were reported to the impious Nero. Therefore, they were arrested and brought before the emperor. He, straightway, had the devout women cast into jail.
Afterwards, the women were asked to renounce the Faith of Christ. They, however, remained firm in their confession of faith. Therefore, they were sentenced to be suspended from a high place to undergo mutilation. Their breasts, hands, feet, and tongues were severed. Finally, their heads were struck off and, in this manner, the blessed athletes of Christ entered the heavens with their crowns of the contest.
From The Lives of the Holy Women Martyrs, Holy Apostles Convent, Bueno Vista, CO, 1991, pp. 125-127. 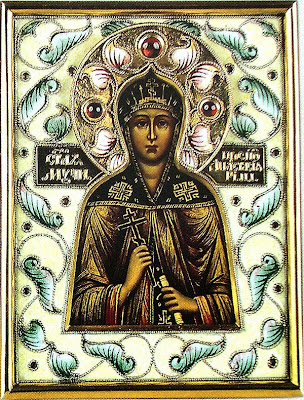