Verses
As a lamb James you were led to the slaughter,
Ruminating on words of piety.
On the thirtieth James was slaughtered with a murderous knife.
The holy James, the son of Zebedee and brother of the holy Evangelist John the Theologian, was one of the twelve apostles chosen by the Lord from among the simple fishermen, to be His disciple. Called by Jesus Christ, James, together with his brother, left his boat, his father and their fishing nets, and cleaved unto Christ [Mt. 4:21-22], following Him everywhere, listening to His preaching and seeing the miracles He worked. And the Lord so loved both brethren that He permitted one (John) to recline upon his breast [Jn. 13:23], and promised to give the other (James) the same cup to drink which He Himself had to drink [Mt. 20:22-23]. And these apostles so loved their Lord and showed Him such loyalty, that they wanted to call down fire from heaven upon the unbelievers, to destroy them [Lk. 9:54], and would have done so, had not our merciful Lord Jesus Christ Himself forbidden them. To these two apostles, James and John, the sons of Zebedee, as well as to the Apostle Peter, did the Lord principally reveal His divine character and His mysteries in preference to all the other apostles, as happened, for example, on Mount Tabor, when the Lord, desiring to show forth the glory of His divinity, took Peter, James and John, and was transfigured before them [Mt. 17:1 ff].
After the voluntary suffering, resurrection and ascension of our Lord, and the descent of the Holy Spirit, the holy Apostle James traveled through Spain and other countries, preaching the word of God. Afterwards, he returned again to Jerusalem and there was threatening to the Jews as thunder [Mk. 3:17], for he courageously and boldly preached Jesus Christ, proclaiming Him the true Messiah, the Savior of the world. James engaged the Pharisees and Scribes in disputations, denouncing them and reproaching them for their hardheartedness and unbelief. And they, unable to withstand him, hired a certain sorcerer, named Hermogenes, to engage him in debate and put him to shame. But the magus, a prideful man, did not wish to converse with James, and instead sent his disciple, Philetus by name, saying: "Not only myself, but even my disciple will James be unable to best in disputation!"
Philetus came and conversed with the holy Apostle James, but being in no position to oppose the wisdom of the Holy Spirit, with which the apostle was filled, he fell silent as one mute, and was utterly unable to open his mouth to express himself. Recognizing the truth, Philetus was humbled and, returning to his master, the magician, he informed him that nothing could overcome James, who even confirmed his words with miracles. Moreover, Philetus advised his teacher to abandon his lore of sorcery and become the disciple of James. But the prideful Hermogenes summoned up demons by his spells and commanded them to hold Philetus in a certain place in bonds, so that he would not be able to move from the spot; and he added: "Let us see how your James will deliver you!"
Philetus sent word secretly to the apostle that he was bound by demons through the spells of Hermogenes. On learning this, the apostle sent him his towel, telling him to take hold of the towel and say the following words: "The Lord looses the fettered, and the Lord sets aright the fallen" [Ps. 145:81]. No sooner did Philetus utter these words, immediately he was freed from the invisible bonds; for the demons, terrified of the apostle's towel and the power of the words spoken, loosed their hold on Philetus and fled from him. Then Philetus, laughing at Hermogenes, went to the holy James and, having learned the holy Faith from him, was baptized.
But Hermogenes, filled with great rage and anger, conjured up the demons who ministered to him, and adjured them to bring to him James and Philetus, bound. But when the demons drew nigh to the dwelling-place in which the holy James and Philetus were sojourning, the angel of the Lord, at the command of God, immediately laid hold of those demons and, binding them with invisible bonds, began to torment them. The demons, tortured by the power of God, cried out for all to hear: "James, apostle of Christ, be merciful to us; for we came to bind you and Philetus on orders of Hermogenes; and behold, now we ourselves are bound fast, and suffer cruelly!" The holy James then said to the demons: "Let the angel of God, who has bound you, release you from the bonds; and go and bring hither to me Hermogenes, doing him no harm." Straightway, the demons, loosed from their bonds, betook themselves to Hermogenes, and, seizing him, set him, bound, before the apostle in the twinkling of an eye, and asked the apostle to permit them to avenge their grievances on the wretch. The apostle asked the demons why they had not bound Philetus as Hermogenes had commanded them to do. To this the demons replied: "We cannot even touch a fly in your house." 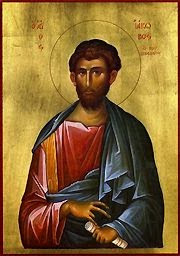 Then said the apostle to Philetus: "Our Lord has commanded us to render good for evil; for which cause, release Hermogenes and deliver him from the demons." After this, the apostle said to Hermogenes, who had been freed from the bonds of the demons: "Our Lord does not desire to have servants under constraint, but desires to have voluntary servants. Wherefore, go wherever you wish!" But Hermogenes said: "No sooner will I leave your home, then the demons will slay me, for I know how great is their wrath; and I also know that it is impossible for me to escape them, if you will not defend me." Then the apostle gave into his hands the staff which he used when travelling. Hermogenes went to his home with this staff and along the way did not sustain any evil at the hands of the demons. Thus, recognizing the power of Christ, and seeing the impotence of the demons, Hermogenes gathered together all his books of sorcery and brought them to the holy James and, falling at his feet, cried out: "True servant of the true God, who delivers the souls of men from perdition! Have mercy upon me, and accept your enemy as your disciple!" Having learned the holy Faith from James, Hermogenes received baptism, burned his books of sorcery on the apostle's orders, and became a true servant of Christ, to such an extent that he performed miracles through the name of Jesus Christ.
The Jews, seeing all that had taken place, were exceeding wroth and persuaded King Herod Agrippa to initiate a persecution against the Church of Christ and put James to death. Then "Herod, the king, stretched forth his hand to vex certain people of the Church. And he killed James, the brother of John, with the sword. And because he saw it pleased the Jews, he proceeded further to take Peter also.... And he put him in prison" [Acts 12:1-4].
Eusebius, Bishop of Ceasarea of Palestine, telling of this James, writes that when he was condemned to death by Herod, a certain man by the name of Josiah, one of those who slandered the apostle to Herod, seeing the valor and boldness of the holy James, and perceiving his innocence and holiness, as well as the truth of the words he spake concerning the coming of Christ the Messiah, came to believe in Christ and became a confessor of the Lord. Immediately, he was condemned to death, along with James. When they went forth to the place of execution together, they met along the way a paralyzed man lying on the road; and the holy apostle healed him. And when they bowed their necks under the sword, Josiah entreated the holy James to forgive him the sin he had committed in his unbelief, that is, that he had slandered him to the King. The apostle, embracing and kissing him, said: "Peace be with you!" And both of them, bowing their heads beneath the sword, ended their lives together. This took place, by God's providence, in the year A.D. 44.
After they were beheaded, the body of the holy Apostle James was taken up by his disciples and, as God permitted, was borne away by them to Spain, where even to this day healings are given forth from his tomb and miracles worked, to the glory of Christ God Who, with the Father and the Holy Spirit, is glorified by all creation, forever. Amen. 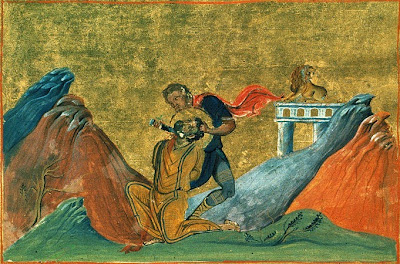 Apolytikion in Plagal of the Fourth Tone
As a disciple and soldier of the Lord, O James, you were ranked among the august choir of the apostles with your brother, and did cleave unto the Savior with all your heart. As one armed with the power of the Spirit, you preached Him unto all, and were cruelly slain by the sword, O all-blessed one. Wherefore, we all honor you.
Kontakion in the Second Tone
On hearing the divine voice calling you, O glorious James, you disregarded the love of your father and ran with your brother to Christ; and together with him you were counted worthy to behold the Lord's divine Transfiguration.
Megalynarion
On the mount of Tabor, O holy James, you did hear the Lord God manifestly proclaim His Son. Him did you boldly preach before the sons of Judah, O Martyr, Apostle and true initiate.
From The Lives of the Holy Apostles, Holy Apostles' Convent, Buena Vista, Co., pp. 73-77.
John at 11:24:00 AM
Share
‹
›
Home
View web version