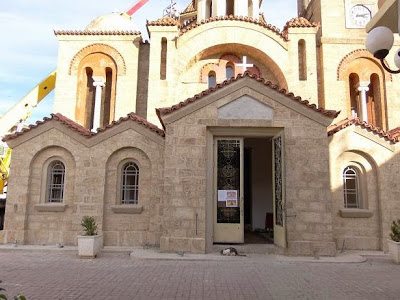 In Greece it was reported today, 22 April 2015, that in the seaside town of Livanites of Fthiotis a possible divine revelation led to the discovery of a skeleton that many are calling a miracle.
The story begins three years ago, when a woman from a well-known family of Livanites saw in her sleep a male figure who was speaking with her, but recently asked her to go to a specific location near the Chapel of Saint George of the Foustanella and "dig" to uncover his buried body, and upon doing so she was to bring his remains to the Chapel of Saint George of the Foustanella.
She was told to specifically do this before the feast of Saint George, who is celebrated on April 23rd, and following the discovery he would appear to her again, perhaps to reveal his identity. The spot where she was to uncover his body was a place over which flowers grew near the sanctuary of the old chapel of Saint George in Paliochori.
This revelation troubled this respected woman of the community, so she informed her family, the bishop and the parish priest and went to the spot that was specifically indicated to her. The first day of digging nothing was found, but the next day, which was today, a skeleton was found and later on the skull.
After cleaning the bones in her house, she brought them to the Chapel as it was requested of her. There they remain stored.
Metropolitan Nicholas of Fthiotida was informed about all this by the woman, and he is moving discreetly and carefully before making an official announcement. He is investigating all the details, including a diary the woman kept in which she recorded everything that was communicated to her through dreams and visions, as well as the spot where the bones were found. An official announcement will be coming soon.
Nonetheless, the community is shocked by the news and it was discussed by everyone today in the community, many of whom are already calling it a miracle, though others are awaiting an official announcement from the Metropolis. In interviews they further revealed that when the bones were uncovered, a beautiful fragrance emitted from them. They also mentioned that this Chapel was built over a very old monastery that once stood there. It is speculated that the man appearing to the woman was perhaps a holy monk or a martyr from the Turkish occupation.

It should be mentioned that Saint George of the Foustanella is not the well-known early Christian martyr of the fourth century, but the New Martyr who was killed by the Turks in Ioannina and is celebrated on January 17th. In his icons he is depicted wearing the traditional "foustanella" or kilt, hence the name of the Chapel. However, the church itself is dedicated to Saint George the early Christian martyr, and therefore celebrates its feast on April 23rd.
Tonight, on the eve of the feast of Saint George, a vigil will be kept in the Chapel of Saint George of the Foustanella.