The Holy Harlot and the Miracle of Repentance 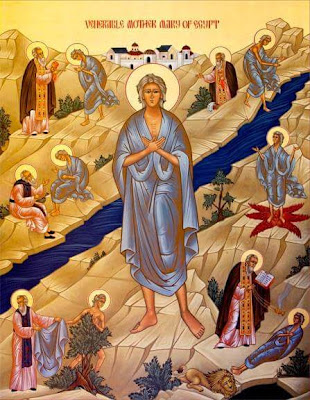 By Monk Moses the Athonite
1400 years ago there was a girl, who had just turned twelve years old, somewhere in Alexandria of Egypt, and who became tangled in the nets of the sex trade. She gave herself body and soul to the fall, sin and corruption.
Flesh worship, wild pleasure and insatiable lust dominate from a young age. For seventeen years she avidly lived this life without inhibitions, shame, doubts, guilt and remorse. She considered herself free, independent, uncontrolled and irresistible. She admired her beauty, her riches, her conquests and her provocations.
A wonderful event happened in Jerusalem where she was unable to enter the church and this brought her to her knees, to tears, to the remembrance of the innocence of her childhood. She began to cry. She began to turnaround. The lover of the flesh suddenly became a lover of God. She is being transformed, she is being unmasked, she is beginning to love that which is beautiful, and she is being resurrected. In her heart, after this unexpected existential change, divine eros prevails. Her life receives deep meaning. She is a hero, a martyr and venerable.
Departing for the desert, beyond the Jordan, she is resolute and relentless. Her thoughts return to her former life and do not allow her any respite for but a minute. For seventeen years she is tyrannized by fierce and obscene thoughts. Just as many years as she lived in sin. Despair almost overtakes her. She has become skeletal by fasting.
As a beast of the desert she circulates. The inhospitable desert, the foreign earth, rocks and caves become her dwellings. For another twenty-three years she lives without the terrible war of her thoughts. They have become annihilated. The famous harlot has become the greatest ascetic of all ages.
Abba Zosimas takes a sacred journey one Lent into the desert and sees a shadow wandering. When he realized it was a woman, he covered her nakedness with a garment and he learned with emotion about her admirable life. He returns to give her communion. A year later he finds her dead. On a tile she notes that she reposed right after having communed.
Sin is not merely a violation of the law, but the lack of love for God. Sin always looks very nice, very attractive and seductive. It arrests the mind, which accepts it and becomes committed. Sin often deprives the soul of blessed serenity. The overcast which precedes sin, declines when it is committed, then a person sees their nakedness and becomes afflicted, they have regret and remorse. The tail of the devil intervenes, so that a person becomes disappointed and does not want to repent.
The great psychoanalyst, Saint John of the Ladder, analyzed with amazing clarity the stages of sin: Assault, Interaction, Consent, Captivity, Struggle and Passion. Passion becomes a habit, my beloved, and for years it causes a person to drift away without facing resistance. Sin darkens a person. Today it is regarded with indifference, it has become the norm, because people think they are doing what they want and they are free. No matter what kind of law is enacted, sin will not cease to be sin and disturb every honorable, serious and conscientious person. We have arrived at the point where we call that which is unnatural as natural, which is a logical absurdity. The results of sin: estrangement, isolation, emptiness, loneliness, despair and heartache.
Saint Mary affectionately assists in the turnaround of all. She failed as a harlot and conquered as an anchoress. She is a fiercely brave woman. Inspiring. She rallies sinners. Do not fear words but peace-snatching acts. Lent is coming to an end and Mary of Alexandria urges us to proceed without fear. She motivates us to refocus and confidentially tells us that even harlots can become saints.
Source: Newspaper Macedonia. Translated by John Sanidopoulos.
John at 8:52:00 AM
Share
‹
›
Home
View web version