Verses
You bore O Conon the marks of the nails of the Lord,
Bearing the marks of nails on your feet you approached Him.
The holy martyr Conon, a gardener from Nazareth of Galilee, lived during the reign of Emperor Decius (249-251). He left Nazareth, bound for the city of Mandron in the province of Pamphylia. Once there, he sojourned in a place called Karmela or Karmena. He resumed his work of cultivating a garden where he would grow a variety of vegetables, and, thereby, he was able to sustain himself.

Conon was a simple and guileless man. When the deputies who were ordered to apprehend Conon because he was a Christian arrived, he greeted them all with his heart and soul. His captors then revealed that he was being summoned to appear before Governor Puplius. Conon innocently remarked: "What does the governor require of me, for I am a Christian? Let him invite them that are of like-mind and worship the idols." Whereupon, the deputies bound Conon and brought him before the governor, who then proceeded to encourage Conon to sacrifice to the idols. Conon then sighed from the depths of his heart. He rebuked Puplius for his folly and confessed that he was of the Christian Faith. He explained that it was impossible for him to renounce his Faith, though he undergo ten thousand torments.
At this point, Governor Puplius condemned Conon to harsh punishment. His feet were pierced with nails, and he was tied behind the governor's chariot. The martyr was then forced to run quickly behind. After a while, the Saint was dragged on his knees. The path was littered with sharp stones which tore at him, and he became covered with wounds. Though terribly lacerated, he continued to pray to God all the while and then surrendered his soul in the hands of God. 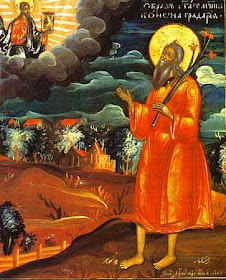 Apolytikion in the Fourth Tone
Thy Martyr, O Lord, in his courageous contest for Thee received the prize of the crowns of incorruption and life from Thee, our immortal God. For since he possessed Thy strength, he cast down the tyrants and wholly destroyed the demons' strengthless presumption. O Christ God, by his prayers, save our souls, since Thou art merciful.

Kontakion in the Fourth Tone
Through the angelic vision that thou wast granted, thou wast instructed in the Faith of Christ Jesus and didst receive the power to work miracles. Wherefore, thou didst utterly quell the demons' presumption, and didst quench deception's flames in the floods of thy contest. O venerable Martyr Conon, pray Christ God, the Friend of man to be gracious unto us all.