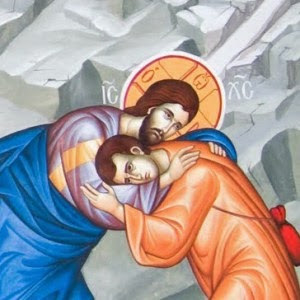 ...continued from part one.
Divine Love as Passionate
Eros, passionate in its desire (cf. Dan. 9:23 and Wis. of Sol. 8:2), throws light on the notion of aberrant (cf. Is. 5:4; Jer. 2:21) or sinful passions: they are not to be suppressed or blotted out but transposed, moulded, educated, put on their correct and natural course. In the monastic context, passions are dealt with differently: they are transcended by the conquest of greater and divine passions.The monk turns all his passions towards the divinity (cf. Prov. 4:27) and offers all his loving effort at the feet of the Lord: "I have seen hesychasts who insatiably nourished their flaming desire for God through stillness, generating fire by fire, eros by eros, desire by desire." It is in this erotic context - eros as "complete union with God, now and always" - that dispassion can be properly understood. The monk who has reached dispassion continually longs to see the Lord's Person (Ps. 41:3) and can almost no longer endure the force of his desire for God; the Macarian Homilies refer to him as being "overcome by a heavenly longing." But, for John, it is God himself who moves the monk, who dwells and is active within him; God is the "tenant" (enoikos) of his person and his passion: it is no longer he who lives but Christ who lives in him (Gal. 2:20). Thus: "The body has been rendered pure and incorruptible by the flame of purity which has extinguished the flame [of passion]."
Already in Evagrios, prayer is seen as a way of increasing one's desire for God. But for John eros between God and man is the essence of prayer: "Prayer by reason of its nature, is the converse (synousia) and union (enosis) of man with God." The monk speaks:

What have I in heaven? Nothing. And what have I desired on earth beside You? Nothing, but to cling continually to You in prayer without distraction... For what higher good is there than to cling to the Lord and persevere in unceasing union with Him?

Or, in the words of Isaac the Syrian: "Fall on your face, even if only for a day and night only, and beseech God with a passionate heart."
Love, being a personal relationship, inevitable entails the self - a personal insatiability and unending desire. All sinful passions end in sin, are self-defeating, as though preordained to miscarry by an act of God's loving providence. But the authentic passion - for God - can have no end and is never fully satisfied; or, even while being satisfied "insatiably", it seeks to outdo and exceed itself, "generating fire by fire, eros by eros, desire by desire." Like fire which "in the measure that it wells up, so it inflames the thirsty person," the desire of the monk has no limits. He turns, perhaps self-defeatingly, into an angel: "They are never weary of praising their Maker... They will never cease to advance in love... until they become angels." This can only be understood in the eschatological sense (Mt. 22:30; Lk. 20:30) of contual love, rather than as a version of angelism. It is a mania for the extreme - "the tyranny of love."
Divine Love as Gift and Joy
As with all else in the spiritual life, the erotic love, "the abundance of eros," which we may have for God, is not of our making but a response to God's call (cf. 1 Thess. 4:9), a consequence of God's alluring grace (cf. Jer. 31:3), of being stung by His arrow of cupid. The Macarian Homilies also speak of a person being "wounded with the passionate affection for the Divine Spirit." It is God who is the first to love: Clement of Alexandria says that "the Father loved so much that He became as woman," and Chrysostom refers to Him as "more affectionate that fathers, more caring than mothers, more erotic than a bride and groom." "Cling, then, without hesitation to Christ who has loved us," says Barsanuphios. For John, our love of God is but an image of His ravishing love for us; we are for Him "a longed-for-dwelling-place" (cf. Heb. 3:6 and Ps. 45:11), despite our unfaithfulness (2 Tim. 2:13). To respond to Him is like accepting nuptial union with Him. If we cannot do this fully, we must at least try to find a place near His bridal chamber or within the courtyard of the palace. More daringly, Symeon the New Theologian describes our relationship with God as "intercourse", as "union in sleeping with Christ"; but it is like the love of a pauper for a Princess.
For Abba Serapion, eros reopens paradise immediately. Being an act of God's grace, eros evokes an attitude of eager expectation, of waiting upon the Holy Spirit, of appeal, of imprecation. The same is expressed in John's rhetorical question "whether there can be any greater good than being glued in union with the Lord and unceasingly waiting on (proskarterein) this union." The word proskarterein denotes ardent expectation, a desiring waiting for the grace of God, which may at times seem to abandon us (cf. Jn. 16:5-7), in order either to induce a spirit of humility or to wound the heart with penthos (contrition), so that one may persevere, in tears and pain (cf. 2 Cor. 7:7), "ever madly seeking... and following" God. But man is never quiescent in his desire for God. Eros "does not stop in its course and allows no respite to him who is wounded by its blessed madness." So, wounded by love for God, John's "heart stays awake in the abundance of eros." The experience is of continual "loss" and "recovery" of Him who is sought for, of Christ's presence in His absence. At any rate, love is nothing in the abstract; it is nothing if not love of another, existing person. As a person burning with love, the monk never abandons the image of his Lover, never lets go, and unceasingly speaks to the Other One, whether in waking or sleeping. "The abundance of eros" is great indeed, and "as it is with bodily things, so it is with the bodiless."
As a source of inspiration, eros has a transfiguring effect. It even makes us "cheerful, glad and carefree." It is a distinctly Christian quality that the experience of God's love can "eat away a person", but this does in no way imply some kind of miserable posture or sad countenance. There is pain in the never ending search for God and in the searing effect of God's grace, but, as John states: "When the whole man is, in a manner, commingled with the love of God, then even his outward appearance in the body, as in a kind of mirror, shows the splendor of his soul. That is how the God-seer Moses was glorified."
Love embraces anguish and joy, dejection and ecstasy - a virtue which contains everything and rises above everything. This, in a way, sums up all that can be said about the virtues as adumbrated by John, in his conception of total man engaged in the variegated, chequered struggle of the spiritual life.
From Ascent To Heaven by John Chryssavgis (Holy Cross Orthodox Press 1989) pp. 189-194. Here also can be found an abundance of footnote and references for the above text.
John at 12:28:00 PM
Share
‹
›
Home
View web version