When St. Arsenios of Cappadocia Saw St. Haralambos in the Holy Water 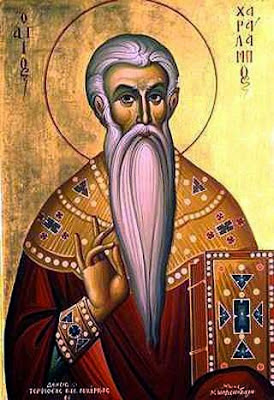 "Once, on Saint Haralambos' day," Prodromos (St. Arsenios' chanter) used to say, "we went to the Panagia (in Kantsi) for an all-night vigil. When we got to Matins, Hatzefendis (this is what they called St. Arsenios) left the sanctuary so we could chant together. While we were chanting at the same lectern, I suddenly saw a white-haired old man at the lectern opposite, bent and supporting himself on a staff, and I started to tremble in awe. When Hatzefendis saw me trembling, he asked:

And I said 'No,' and pointed to the white-haired old man opposite us. Hatzefendis was not in the least disturbed and said to him in Turkish:

'Come and we'll chant together.'

The white-haired old man did not answer, however, just made a sign for us to go on by ourselves. Since I was no longer paying attention to the book but kept peeping at that old man, and my mind was on him, this produced a hiatus and he was forced to leave. And as he left, we saw him disappearing into the pool of holy water and the water being splashed all over the church.

Hatzefendis said that the white-haired old man was Saint Haralambos.

We finished the Divine Liturgy and then went back to the village where I started telling what had happened. Many Farasiotes then went running to the Chapel of the Panagia and in all reverence took some holy water which had been splashed around the church through the Saint's miracle."

After that event, Hatzefendis spent forty days in retreat in his cell and said that he was indisposed, and the villagers thought that he was ill. But others said that he had been frightened by what had happened.

From Saint Arsenios of Cappadocia by Monk Paisios of the Holy Mountain, Souroti, Thessaloniki, 1989, pp. 73-74.