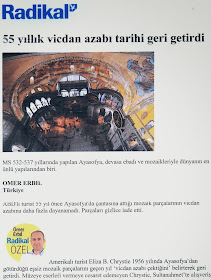 By Nikos Chiladakis
An amazing story was brought to light that shows the grandeur of the Orthodox holiness of its greatest architectural creation, that has been characterized as one of the greatest wonders of human civilization, the Church of Hagia Sophia in Constantinople. This was presented by the Turkish press (in the newspaper Radikal, by the journalist Ömer Erbil), which testified to another powerful sign of the presence of Orthodox holiness in our neighboring country.
The story refers to the theft of eleven valuable Christian icons lined with gold from the Church of Hagia Sophia fifty-five years ago, and were returned after a great war of the conscience to its real owner, namely the greatest symbol of Orthodoxy that today dominates the Queen of Cities.
The protagonist of the story is an American, Eliza B. Chrystie, who visited fifty-five years ago the Church of Hagia Sophia in Constantinople.
At that time there was a lot of restoration work being done and some icons were on the floor to be recorded and processed by those responsible for the restoration. Eliza B. Chrystie then found the opportunity to steal some icons from the unsuspecting workers who were renovating the church.
The American tourist returned to the United States overjoyed and presented her "loot" from the historic church of Constantinople to her friends.
But as the years passed, Eliza B. Chrystie started to feel as if the icons had a voice that spoke to her, stressing that they do not belong to her and they should be returned to their natural environment, namely Hagia Sophia.
Gradually these voices grew louder and the presence of these Christian icons turned into a nightmare for the American tourist. Now remorseful she increasingly began to think how she could return them back to the sacred church.
But because she had already grown old and could not by herself go to Constantinople, she requested the help of her younger sister. Hence after fifty-five years with the sacred loot, she found herself once again in Constantinople. But there she was concerned how to deliver the icons without creating a problem, while at the same time calming herself mentally.
The two sisters then visited a Turkish goldsmith, Adil Birsen, in order to purchase jewelry. The Turk had the impression that something was bothering them but they weren't revealing it.
The next day they went back to the store and the American asked him to help her with something very serious, and as she spoke, according to the Turkish goldsmith, she began to cry, leaving Adil Birsen speechless, who did not understand exactly what she wanted.
Eventually Eliza B. Chrystie confided the reason for the visit and asked for his help to return the stolen icons to Hagia Sophia, stressing that this was a confession of the conscience like the confession of a great sin.
Of course the Turkish goldsmith agreed to help both Americans, and then Eliza B. Chrystie, giving him the icons, said with great emotion: "At last now I will be at peace and I will be able to die quietly having done my duty to confess my great sin and to make good in this way."
This news became widely known by the Turkish press, causing great emotion. Characteristic was the director of the Museum of Hagia Sophia, Hayrullah Cengiz, who publicly praised the action of the American, stressing that it was a move of confession and purification for an action that took place fifty years ago, and he emphasized that in the same manner must other precious objects of Hagia Sophia be returned that at certain times were unlawfully removed from this great Christian religious symbol.
This event is characterized as a "miracle of the holy icons" of Hagia Sophia in Constantinople, and is another amazing message that Orthodoxy remains alive within the largest architectural creation in the Queen of Cities.
Source: Translated by John Sanidopoulos.
John at 1:23:00 PM
Share
‹
›
Home
View web version