The Festival of Saint Agatha in Stamna of Aitolia 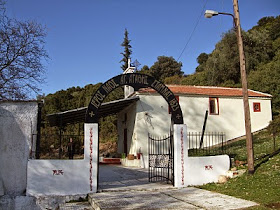 By Archimandrite Demetrios Kavvadias
In recent years the preeminent French-Greek journalist and television host Nikos Aliagas has made more widely known throughout Greece and the global audience the feast of Saint Agatha in Stamna of Aitolia, which is where he is from. And after a miracle of the Saint, he baptized his daughter with the name Agatha.
This festival takes place in the Chapel of Saint Agatha in Stamna on August 23rd, when the ninth day of the Dormition of the Theotokos is celebrated, and it exists as a custom since the Revolution of 1821. 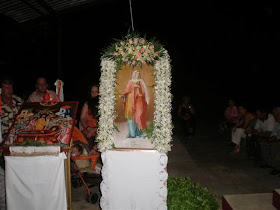 On 23 August 1824 when the Peloponnese suffered from the civil war, Mavrokordatos tried to prevent the spread of the phenomenon in Rumeli and above, and therefore called a secret meeting on Mount Zygos (seat of Psili Panagia, over the ruins of the old Monastery of the Panagia) with the chieftains of northwestern Greece. Finally they decided on an assembly which gathered in December that year. But because they were not in agreement and they were shouting at each other, confusion reigned. Suddenly an earthquake took place, which was considered an act of divine intervention for there to be a compromise. Thus was established the annual festival in commemoration of the event on August 23rd, but not in Psili Panagia because it had not been accessible to the people. It was decided to build a lower chapel in the name of Saint Agatha, who saved them from the earthquake. Since then there has been a traditional festival which is organized by rigged foustanella wearers, and has the participation of people from around the area as well as the surrounding counties.

The procession traverses a long way and is with organ accompaniment and songs, such as: "I bid you goodnight, Saint Agatha my sweet, and we fire a shot, putting down the weapons...". When they reach the main square of Aitolia, the festival ends.
Source: Translated by John Sanidopoulos.