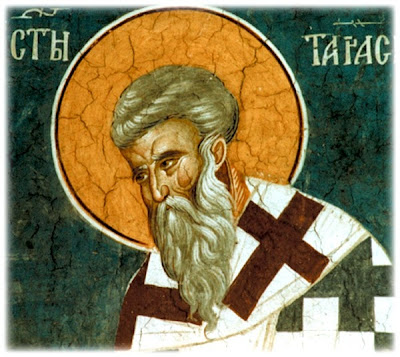 Apolytikion in the Fourth Tone
A model of faith and the image of gentleness, the example of your life has shown you forth to your sheep-fold to be a master of temperance. You obtained thus through being lowly, gifts from on high, and riches through poverty. Tarasios, our father and priest of priests, intercede with Christ our God that He may save our souls.
Kontakion in the Third Tone
Thou didst make the Church to shine with thy most Orthodox doctrines, teaching all to venerate and worship Christ's sacred image; so didst thou convict the godless and hateful doctrine of all them that fought against Christ's ven'rable icon; O Tarasios our Father most wise and blessed, to thee we all cry: Rejoice.
John at 10:48:00 AM
Share
‹
›
Home
View web version