By Hieromonk Makarios of Simonopetra
John, a nobleman's son from Cursano near Stylos in Calabria, was born in Sicily, where his mother had been carried into captivity by the Saracens and taken to wife by an Arab notable of Palermo. He was brought up in the Faith and he returned to Calabria at the age of fourteen to be baptized. From that time his intention was to follow the way of life of Saint John the Baptist, whose holy icons he loved to venerate in church.
He attached himself to the ascetics Ambrose and Nicholas, who lived in a lavra on Mount Consolino, and proved an exemplary disciple, spending his days in humble obedience and manual work, and his nights in prayer bathed in tears. 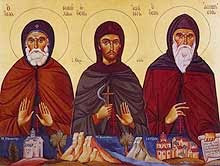 One summer's day, he took some bread and a skin of wine to the fields for the harvesters and paid no attention to their coarse humor. Having eaten and drunk their fill, the harvesters were surprised because the amount of food and drink that remained was no less than before. A sudden storm arose and they scattered to find shelter. On returning to work, they saw to their amazement that all the corn had been cut and tied into sheaves. This miracle won the Saint the surname Theristis - "the Harvester".
Edified by his miracles and by his humble loving-kindness, the brethren chose him as their Abbot, and the lavra later became known by his name. After his blessed repose, which occurred about the middle of the eleventh century, miracles continued to abound through his relics, as a blessing for his Monastery and for the town of Stylos, where he is honored as its protector till this day.
From The Synaxarion: The Lives of the Saints of the Orthodox Church, Vol. 3, compiled by Hieromonk Makarios of Simonos Petra and translated from the French by Christopher Hookway (Chalkidike, Greece: Holy Convent of the Annunciation of Our Lady, 2001).

The Monastery of San Giovanni Theristis
Calabria was part of the Byzantine Empire until the 11th century. After the Norman conquest of southern Italy, the Monastery developed as one of the most important Basilian monasteries in southern Italy, maintaining its splendour until the 15th century, with a rich library and numerous art treasures. It lived a phase of decline until 1579, when the founding of the Basilian Order of Italy restored it as the main Basilian center in southern Calabria. However, in the 17th century brigandage damaged the monastery, and the monks decided to moved to a bigger monastery outside the walls of Stylo, carrying with them the relics of Saint John the Theristis. In the early 19th century, after the Napoleonic conquest of the Kingdom of the Two Sicilies, it was acquired by the comune of Bivongi, who sold it to private owners. In 1980 it was sold back to the municipal authority and, in the 1990s, restored to the Italian Basilian Order. On 21 March 2001, the Patriarch of Constantinople Bartholomew I visited the monastery and returned here the Saint's relic from Stylo.
After the establishment of the Metropolis of Italy, the Monastery was restored beginning in 1990, and in the autumn of 1994 a group of monks from Mount Athos came and settled there. In December of that year, the Regional Council of Calabria declared the area sacred. The restoration of the Monastery was completed in 2002. This Monastery became the first to be founded by monks from Mount Athos in Italy.
In July 2008, the city council of Bivongi has granted the use of the church for 99 years to the newly formed Romanian Orthodox Church in Italy, after the failure of the Greeks to keep it.
The edifice is an example of the transition between the Byzantine and Norman styles in architecture in southern Italy. Norman elements include the four corner pilasters closed by four arches, which support the dome, two of them being ogival.
Clearly Byzantine is the exterior, in particular in the external walls, in the fake columns of the apse, which forms ogival arches, and in the 16 small columns decorating the dome's tambour. The interior also houses traces of Byzantine frescoes, such as that portraying Saint John the Theristis. 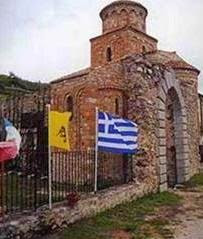 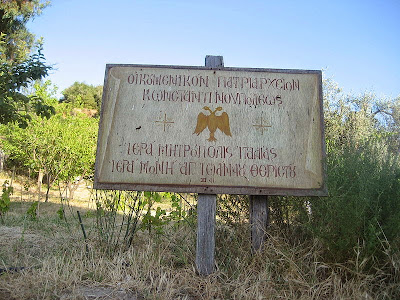 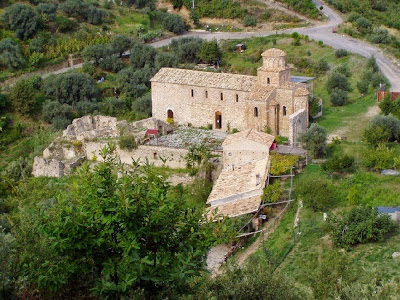 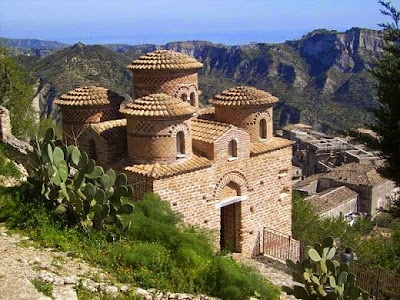 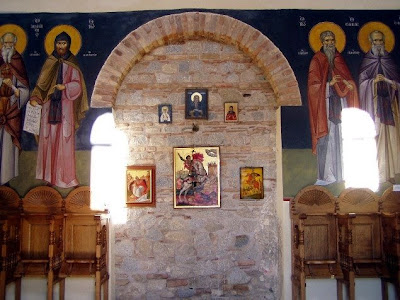