St. Gregory the Great on the Unity of the Three Apostolic Sees of Rome, Antioch and Alexandria 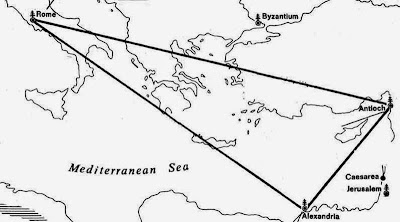 When Saint Gregory the Great (Mar. 12) was Pope of Rome, he had a lively correspondence with Saint Eulogios, Pope of Alexandria (Feb. 13), and in Letter 40 of Book 7 he writes the following about the unity of the three Sees of Rome, Antioch and Alexandria due to their association with the Apostle Peter, and their mutual authority:
Though there are many apostles, yet with regard to the principality itself the See of the Prince of the apostles alone has grown strong in authority, which in three places is the See of one. For he [Peter] himself exalted the See in which he deigned even to rest and end the present life [Rome]. He himself adorned the See to which he sent his disciple as evangelist [Mark to Alexandria]. He himself established the See in which, though he was to leave it, he sat for seven years [Antioch]. Since then it is the See of one, and one See, over which by Divine authority three bishops now preside, whatever good I hear of you, this I impute to myself. If you believe anything good of me, impute this to your merits, since we are one in Him Who says, "That they all may be one, as You, Father, art in me, and I in you that they also may be one in us" [John 17:21].
John at 11:58:00 AM
Share
‹
›
Home
View web version