Verses
You shepherded the people uprightly Basil,
Verily you reigned in your office.
Saint Basil came from Athens.* In 875 he was tonsured a monk by Saint Euthymios the New in the Monastery of Peristera near Thessaloniki, founded by the same Saint Euthymios. Saint Basil was a disciple of Saint Euthymios and later became his biographer. Saint Euthymios foretold his future episcopal election and career.
After spending some time as a hermit on Mount Athos, Basil founded or restored the Monastery of Saint Basil the Great and honored it with the name of Divine Ascension. This Monastery is located near Hilandari Monastery, and he settled there.
As foretold by Saint Euthymios, he was elected Bishop of Thessaloniki in 904. He is primarily known from the biography of his spiritual father, in which he vividly recounts the exploits of his Elder, whom he tried to imitate. After serving his flock and adorning the throne of Thessaloniki with his faith and virtue, he reposed peacefully in the Lord.
Monk Gerasimos Mikragiannanitis composed a service in his honor. 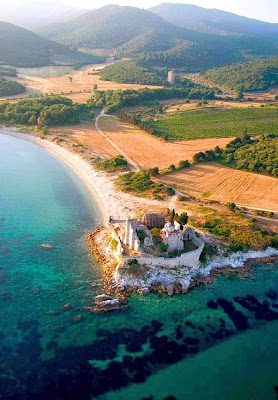 The Kathisma of Saint Basil used to be a Monastery, and it was called Paliomonastiro (Old Monastery). It is located at the dock of Hilandari Monastery, towards the Thracian Sea. Its foundation dates back to the end of the ninth century and was founded by Saint Basil, the disciple of Saint Euthymios the New. However, there is documentary evidence for the prior existence of this Monastery, so he may have just restored it. It is built on a rocky seaside location and has a strong defensive character. It consists of the main building, the castle and the tower. Initially it was known under the name "Fort of Gold" and within it had a small sanctuary. The entrance was once protected by a moat and drawbridge. Today one monk from Hilandari Monastery lives there. 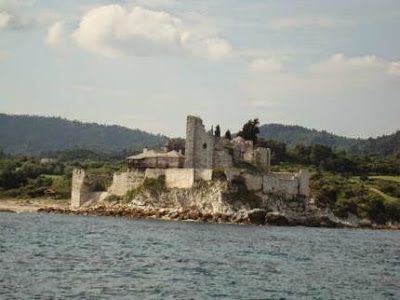 * It should be noted that there were two bishops of Thessaloniki named Basil at about the same period, and there is much confusion between the two among historians. The memory of Saint Basil on February 1st is for Saint Basil the Confessor who, according to the Life of Saint Ignatius, Patriarch of Constantinople, was elected Bishop of Crete during the first phase of his patriarchate (847-58), but he was soon transferred to Thessaloniki because of Arab oppression in Crete. His appointment as papal vicar of Eastern Illyria is confirmed by a bull of Pope Nicholas I in 860. Basil's bold attempt (c. 862) to resolve the controversy over the nomination of Saint Photios provoked the anger of Emperor Michael III, whose consequent ill treatment won the holy bishop the title of "Confessor". Saint Symeon of Thessaloniki records that Saint Basil's tomb was near to that of Saint Gregory Palamas in the Cathedral of Hagia Sophia in Thessaloniki.
Because of the confusion between the two Saints known as Basil and who both served as bishops of Thessaloniki, they are generally commemorated together on the same day.
John at 9:11:00 AM
Share
‹
›
Home
View web version