Life of the Holy Hieromartyr Haralambos of Magnesia the Wonderworker 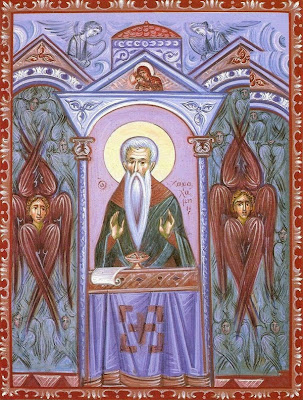 On the 10th of the month (of February), we keep the Memory of the Blessed Hieromartyr Haralambos, of Saints Porphyrios and Baptus, the tormentors of Saint Haralambos, and of the Three Holy Women of Magnesia, who on beholding his martyrdom believed in Christ and were beheaded.
By Hieromonk Makarios of Simonopetra
The holy, glorious Martyr Haralambos lived at the time of the Emperor Septimus Severus (194-211) in the city of Magnesia on the River Meander near Ephesus.* He was 107 years old and had ministered as priest to the Christians of the city for many years, devotedly instructing them in the way of truth and preaching Christ to all, regardless of the threats of the pagans.
When he was denounced as a dangerous mischief-maker and brought before the tribunal of the Governor Lucian, he responded to his threats in these terms, “You little know what is for my good and well-being. Nothing could be more pleasing to me than to suffer for Christ. So don’t hesitate to put my old body to the tortures you deem the worst, and you will learn that the power of my Christ cannot be overcome.” He was then stripped of his priestly robe by the tormentors, who tore his flesh with iron claws without being able to elicit a single cry of pain from him. On the contrary, he said, “Thank you, brothers. In flaying my old body, you are renewing my soul and preparing it for everlasting blessedness.” 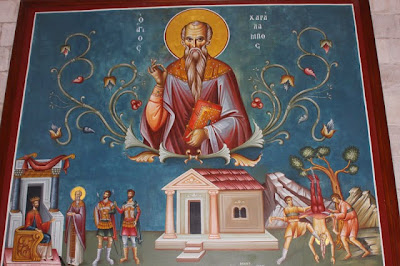 When the Governor saw the steadfastness of the old man, far from repenting and giving glory to God, he hurled himself at him in uncontrollable rage, tearing at his skin with his bare hands. Then, by an act of God, his hands were suddenly severed and remained claw-like and lifeless on the Martyr’s body. Moved to pity by the tyrant’s cries and supplications, Saint Haralambos gave himself to prayer and obtained his healing. This astonishing miracle and demonstration of the love of Christians for their enemies brought Lucian, as well as the tormentors Porphyrios and Baptus, to believe in Christ God and to renounce the cult of idols. Three women onlookers also rushed forward and fearlessly proclaimed their faith. The grateful Governor was immediately baptized by the Saint and a great many inhabitants of the province of Asia were won for Christ.
When the Emperor Severus learned that the inhabitants of Magnesia and the surrounding country were abandoning idolatry and receiving holy Baptism from the old priest who had been condemned to death; that the blind were recovering their sight at his prayer and the crippled were walking, he was very troubled indeed. He immediately sent 300 soldiers to Magnesia with orders to bring the Saint, nailed and chained, to Antioch in Pisidia where he was residing. The soldiers treated the old man very badly on the road, until the horse on which they had set him suddenly uttered a condemnation of the Emperor as an enemy of God, and of his soldiers as slaves of the devil — to the great terror of the military, who for the remainder of the journey did the Saint no harm. 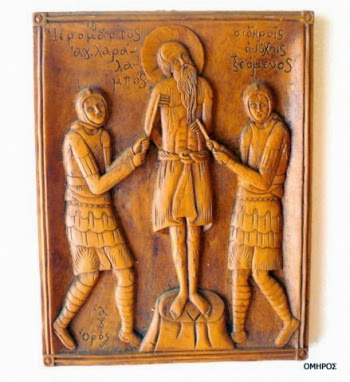 As soon as the venerable old man was brought before him, the Emperor had him thrown into a blazing furnace with a long skewer through his chest. However, the fire went out as soon as it touched the Saint who, to the Emperor’s astonishment, remained insensible to what he suffered. What was the secret of his invulnerability, the tyrant wanted to know. “The power of Christ!” replied the Saint. Severus then put this to the test and presented him with a man possessed by a demon for thirty-five years. The Saint drove out the unclean spirit with a single word. Severus next produced the corpse of a young man about to be buried. After addressing a fervent prayer to God, Saint Haralambos gave the youth his hand and, to the Emperor’s amazement, raised him from the bier as though from sleep.
Then the Prefect Crispus shouted, “Your Majesty should put this sorcerer to death straight way!” At this, the Emperor’s hatred broke out again and he commanded Saint Haralambos to sacrifice to the idols. On his refusal, he ordered them to break his jaw with stones and to set his beard on fire. But God acted once again. The flames turned on the tormentors and the place where they stood was shaken by an earthquake. 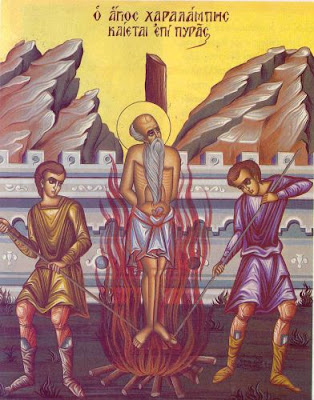 Lifted up off his throne and suspended in the air, the Emperor was whipped for a good while by unseen angels. On learning of his predicament, his daughter Galinia confessed Christ as Almighty and came to implore the holy Martyr to release her father from chastisement. This he did; but the Emperor’s amazement at the power of God was short-lived, and he soon returned to his idolatrous madness. Despite the remonstrances of Galinia, who reminded him of the divine blessings which had lighted on him, he kept Saint Haralambos in custody and had him tortured anew. He also turned on Galinia and threatened her with death unless she sacrificed. She made as if to obey but, on entering the temple, she threw the statues to the ground and broke them in pieces. Severus sent to the foundry to have new statues cast, but she shattered these too, so that he became a laughing-stock.
Severus then made a last attempt to break the instigator of his daughter’s conversion. But Saint Haralambos withstood every device of his tormentors with adamantine fortitude and all the onlookers were dazzled by the brilliance of Grace. He welcomed the death sentence with joy, and, on reaching the place of execution, he raised his hands and eyes to heaven. He thanked God for having brought him to the issue of his contest, and he asked Him to grant salvation of soul, health of body and abundance of good things in the name of His Martyr. A voice from heaven was then heard. “Come Haralambos, valiant in fight, to share in the joy and splendor of the Martyrs and holy priests!” His head fell beneath the sword on February 10th and his body was buried by the blessed Galinia. 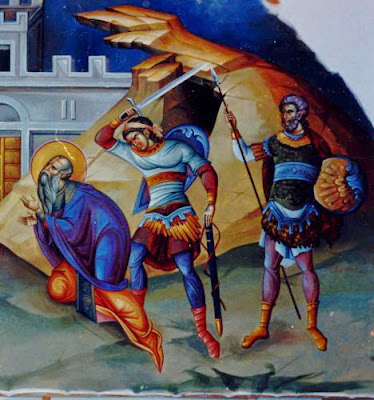 The skull of Saint Haralambos is kept at the Monastery of Saint Stephen at Meteora. The fragments of his holy relics, which are to be found in many places in Greece and elsewhere, accomplish frequent miracles and have made Saint Haralambos, the most aged of all the holy Martyrs, especially dear to the people of Greece.
* It should be noted that the hymns for this feast indicate he was from Magnesia in Thessaly, Greece.
From The Synaxarion: The Lives of the Saints of the Orthodox Church, Vol. 3, compiled by Hieromonk Makarios of Simonos Petra and translated from the French by Christopher Hookway (Chalkidike, Greece: Holy Convent of the Annunciation of Our Lady, 2001) pp. 463-466.

Apolytikion in the Fourth Tone
O wise Haralambos, you were proven an unshakable pillar of the Church of Christ; an ever-shining lamp of the universe. You shone in the world by your martyrdom. You delivered us from the moonless night of idolatry, O blessed one. Wherefore, boldly intercede to Christ that we may be saved.
Kontakion in Fourth Tone
O Hieromartyr, athlete, champion Haralambos, your relics are a priceless treasure of the Church. Wherefore she rejoices, glorifying the Creator.
John at 10:54:00 AM
Share
‹
›
Home
View web version