Verses
Christ was pierced with nails in His hands and feet;
Julian added the head as well.
Saint Julian was a pious young physician of the city of Emesa (modern day Homs in Syria) in Phoenicia, who remained faithful to Christ when many apostatized because of persecution. This was a time when Greek pagans, during the reign of Emperor Numerian, arrested Silouan, the bishop of the city, with the deacon Luke and the reader Mokios (Jan. 29) in 284, and he hurried to their prison in order to embrace them with devotion and to encourage them in the glorious contests of martyrdom. Although they had been left in prison to languish from starvation and thirst, they had survived. Thus they were sentenced to become prey for the wild beasts. As they were being brought out, Julian hastened to them to embrace them and encourage them, and he was immediately arrested. Meanwhile, the three holy Martyrs, being in constant prayer, surrendered their souls to Christ before the wild beasts devoured them, and faithful Christians later gathered their relics. 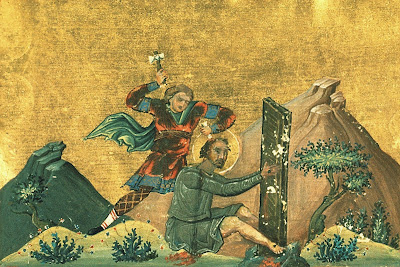 Julian suffered in prison for eleven months. Executioners then drove twelve iron nails into his head, feet and hands. Left for dead, he managed to drag himself to a cave where, having uttered a fervent prayer, he surrendered his holy soul to the Lord.
A beautiful church, Saint Julian Antiochian Orthodox Church (Deir Mar Ilian), was built in Emesa in his honor over the cave where he died. Saint Julian is often also referred to as Saint Ellien of Homs. During renovations to the church in 1970, his coffin was rediscovered. Many miracles have been attributed to Saint Julian through the centuries. Saint Julian is sometimes included among the holy unmercenary physicians (Anargyroi).

Apolytikion in the Third Tone
Julian, holy champion and healer, intercede with our merciful God to grant our souls remission of sins. 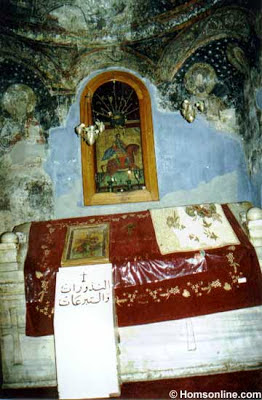 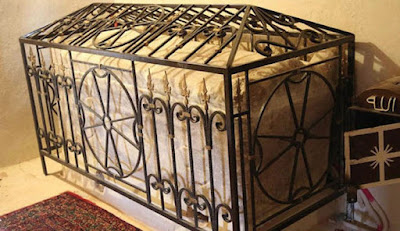 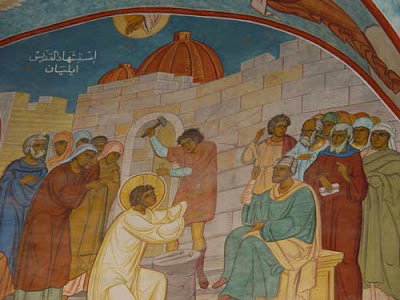