Holy Hieromartyr Blaise, Bishop of Sebaste, and Those With Him

By Hieromonk Makarios of Simonopetra
Born in the province of Armenia and a physician by profession, Saint Blaise (Vlasios) led a life life like the righteous Job, "being blameless and upright, and one who feared God and eschewed evil" (Job 1:1). His virtues having won him the affection of all his fellow-citizens, he was elected Bishop of Sebaste (Sivas) in Eastern Anatolia. During the Great Persecution, he boldly confessed the Faith and encouraged the holy Martyrs "to fight the good fight" to the end. He visited Saint Eustratios in his dungeon before his glorious martyrdom and served the Divine Liturgy for him. Afterwards he took it upon himself to collect the honorable relics of the Five Martyrs (Dec. 13) in order to present them for the veneration of the Christian people.
After some time, he withdrew to Mount Argea, a short distance from Sebaste, where he lived enclosed in a cave, sending up to God pure prayers free of all distraction. Attracted by the scent of his virtues, wild animals approached him as a second Adam and waited quietly at the mouth of the cave for him to complete his prayer and give them his blessing or heal their wounds.
In the reign of the Emperor Licinius (c. 316), Agricolaus, the Governor of Cappadocia, came to Sebaste, intent on rounding up the Christians. As he planned to feed those who persisted in the Faith to the beasts in the amphitheater, he detailed a party of soldiers to trap wild animals on Mount Argea. However, to their amazement they came upon a large group of fierce animals, lions, tigers, bears, wolves and others grazing peacefully together outside Saint Blaise's cave. They informed the Governor, who sent them back to arrest the holy hermit. He greeted them cheerfully and told them that he knew from a vision that they were coming for him. 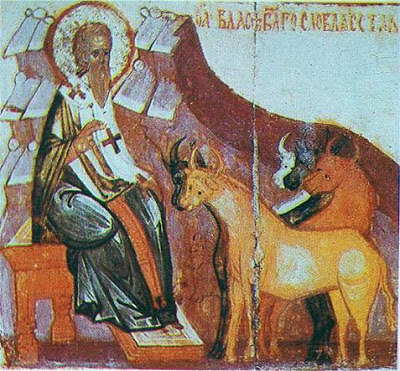 Many pagans who encountered the Saint on his way back to Sebaste experienced the peace and unutterable gentleness which emanated from him, and were converted to Christ. The diseases of both men and animals were cured as he went by.A distraught mother brought him her child who was choking to death on a fish bone. He prayed to the Lord to restore the child to health, as well as all those who in time to come would invoke his intercession in case of similar accidents. Then he returned the infant to his mother in perfect health.
When they reached Sebaste, Blaise was brought before the tribunal. He was unflinching in his response to Agricolaus and roundly condemned the vain cult of vacuous idols. He was beaten with rods, which he bore joyfully, and was then thrown into prison. When put to new torments he told the Governor, "I am not afraid of your tortures because I am looking forward to the good things to come." At this he was thrown back, covered in blood, into his dungeon.
Seven devout women followed him and anointed their faces with the drops of his blood which fell to the ground, as though with the most precious ointment. They were arrested there and taken to the Governor, who threatened them with the direst torments unless they sacrificed to the idols. They made pretense of agreeing and asked for the idols to be brought to the lakeside - the very lake which would soon witness the glorious contest of the Forty Martyrs (Mar. 9) - so that they might reverently wash them before sacrificing. However, as soon as the statues were brought, they threw them into the depths of the lake. Agricolaus was enraged when he heard of this. He ordered a large brazier to be made ready with molten lead and iron wool-combs and told them to decide whether they preferred those torments to the fine clothes and jewels which were also laid out nearby. One woman ran forward and threw the costly outfits into the brazier, encouraged by her two young children who shouted, "Don't desert us! As you have nourished us with your milk, let us follow you to inherit the Kingdom of Heaven!" The tyrant then had the holy women bound to stakes and the tormentors tore their flesh with the wool-combs. Since they remained miraculously unharmed, even after being thrown into the flames, they were beheaded, while fervently giving thanks to God and to his servant Saint Blaise. 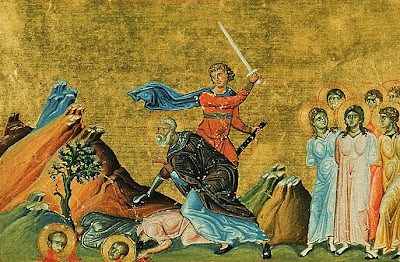 Having failed in his efforts to break Saint Blaise's resolve, Agricolaus condemned him to drowned in the lake. The holy Martyr made the sign of the Cross at the water's edge and began walking across the surface of the lake as the Savior had done on the Sea of Galilee. On reaching the middle, he invited the pagans to join him, if they believed they could trust themselves to their gods. Sixty-eight of them took up the challenge and drowned, while a bright angel appeared and invited the Saint to return to the shore in order to receive the crown of glory.
When he and the undaunted Two Children were condemned to be beheaded, Saint Blaise, shining with the divine light, sent up a prayer on behalf of all who in time to come would call for his aid in illness and trials. Thereupon the Lord appeared to him in all His glory, saying, "I have heard your prayer and grant your request." The bodies of the holy Martyrs were laid to rest with honor, and became a source of blessings for those who met annually at their place of burial to commemorate them. Saint Blaise is one of the most venerated of holy healers in both East and West.*

Notes:
* Saint Blaise is invoked as a sure healer of those suffering neck wounds and having throat problems. He is also considered the patron of wool combers and wild animals. Holy water blessed in his honor is sprinkled upon cattle which are sickly.
A portion of his relics reside in the Athonite Monasteries of Konstamonitou and Dionysiou; likewise, a portion is found in the Church of Saint Nicholas in Kerkyra (Corfu), together with the relics of Saint Theodora the Empress, also commemorated today.
From The Synaxarion: The Lives of the Saints of the Orthodox Church, Vol. 3, compiled by Hieromonk Makarios of Simonos Petra and translated from the French by Christopher Hookway (Chalkidike, Greece: Holy Convent of the Annunciation of Our Lady, 2001) pp. 474-477.

Apolytikion in the Fourth Tone
As a sharer of the ways and a successor to the throne of the Apostles, O inspired of God, thou foundest discipline to be a means of ascent to divine vision. Wherefore, having rightly divided the word of truth, thou didst also contest for the Faith even unto blood, O Hieromartyr Blaise. Intercede with Christ our God that our souls be saved.
Kontakion in the Second Tone
O unfading bloom, thou godly shoot and fruitful branch of Christ God the Vine, O holy and God-bearing Blaise, do thou fill with thy joy them that with faith observe thy memorial; and unceasingly intercede with Christ our Redeemer that we all be saved.
John at 1:20:00 PM
Share
‹
›
Home
View web version