Was Zechariah, the Father of John the Baptist, a High Priest? 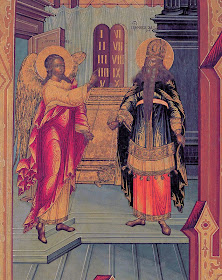 What about the fact that Zechariah was said to be a Priest in the division of Abijah (a descendent of Eleazar, the son of Aaron) and chosen by lot to burn incense in his appointed order, which according to II Chronicles was usually a service performed twice a year by Priests for a week at a time? This can be clarified by the fact that all this is indeed true, that Zechariah was indeed a Priest of the division of Abijah, but that he was chosen by lot could very well indicate that he was chosen by lot to be High Priest at some point in time, and that he was to burn incense is one of the primary duties for the Day of Atonement, which at this time could have been during his appointed order as a Priest, thus indicating the contextual reason as to why Zechariah is called a Priest by Luke.
It is important to note that Luke says that after performing his service and receiving the vision of the Angel, Zechariah exited the Holy Place to find the multitudes worried (1:21-23).
Consider one detail pertinent but lacking in this story: When the High Priest would offer incense in the Holy of Holies on the Day of Atonement, he would say a brief prayer before exiting. If the High Priest was to die inside, the other Priests on duty would have to retrieve his body without entering the Holy of Holies. Therefore, the prayer of the Priest needed to be brief, lest the people grow concerned about his predicament, since his body could not be retrieved from the Holy of Holies (unless they pulled him out by a rope attached to him) nor could they enter the Holy Place when the incense was offered. Two Jewish texts illustrate this:
Mishnah, Yoma 5.1: "He did not make the prayer long so as to frighten Israel."
Jerusalem Talmud, Yoma 42c (regarding an incident that happened to a High Priest, Shim'on the Righteous who served as High Priest around 200 B.C.): "Once a certain high priest made a long prayer and [his fellow priests] decided to go in after him - they say this high priest was Shim'on the Righteous. They said to him: 'Why did you pray so long?' He said to them: 'I was praying that the temple of your God would not be destroyed.' They said to him: 'Even so, you should not have prayed so long.'"
So, when Zechariah exited the Holy of Holies and the Holy Place in late fashion, the people waiting outside would have naturally been worried. When the Angel of God appeared before Zechariah while he was offering the incense, he “was troubled when [Zechariah] saw [Gabriel], and fear fell upon [Zechariah]” (1:12). This was a natural reaction from Zechariah, as any activity out of the ordinary in the Holy of Holies and the Holy Place may have spelled death for the High Priest. But the Angel assured him to not be afraid, and that his prayer [according to Chrysostom, this prayer was for the remission of the sins of the people] had been answered (1:13) [it was answered with the birth of John who would be the prophet of the Messiah]. Luke does not say that Zechariah prayed. It is assumed by Luke that his reader, Theophilus, who was probably a High Priest, would have understood the procedure.
Lastly, there are three ancient accounts of divine visions that took place in the Temple of Jerusalem, and a close reading of all three show a common narrative (Ant. 11:326-328, Ant. 13:282-283, and Luke 1:5-23). The first two were written by Josephus in his Antiquities that refer to Jaddus the High Priest and Hyrcanus the High Priest, while the last refers to the story of Zechariah by Luke the Evangelist. There are sufficient differences between these three narratives to conclude that Luke is not directly dependent upon Josephus or vice-versa. Yet there are haunting similarities which suggest the possibility that both Josephus and the author of Luke-Acts may have known and used a common High Priestly narrative tradition. Among the similarities is that all three took place in the Temple after a sacrifice of some sort and bore a message of salvation for the people. In his excellent work on Hellenistic apologetic historiography Gregory Sterling observes the common intellectual heritage shared by Josephus and the author of Luke-Acts as Hellenistic Jewish apologists for their respective communities, Jewish and Christian. Now if this is true, then it would be safe to assume that since the other visions in the Temple were given to High Priests, why should not Zechariah be a High Priest as well.
John at 1:41:00 PM
Share
‹
›
Home
View web version