The Honoring of St. Kosmas is an Old Tradition for Albanians 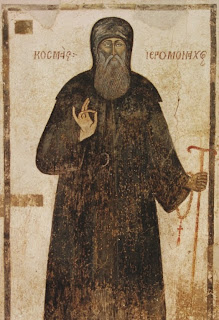 The 19th century fresco of Saint Kosmas in the monastery dedicated to him.
After attacking Archbishop Anastasios, after attacking the people that work for the Orthodox Autocephalous Church of Albania, after spreading all sorts of slander and lies about the Orthodox canons and statutes, after defaming the history of faith, it is now the turn of our saints. Specifically, most recently the articles that have appeared in certain media, in which they speak evil about one of the most revered saints among the Albanians and beyond – St. Kosmas (martyred in 1779).
One of the false arguments used says that the honoring of this great martyr has not existed among the Albanian Orthodox Christians; even if it has begun, starting after 1961, when with the decision of the Ecumenical Patriarchate he was placed on the list of the revered saints by all the Orthodox Churches. All of this is not true; the honoring of Saint Kosmas as a local saint began in the 18th century, in all those areas where he made an extraordinary contribution to awaken the oppressed conscience of the Orthodox people from the long night of Ottoman rule, evidently halting the Islamization of these regions. This is proven by the consciousness of the Albanian Orthodox people, by the frescoes and icons, the ecclesiastical service for the Saint, his monastery built with the care of Ali Pasha Tepelena (1814-1815) and above all, it is proven by the great honor accorded to him by all of the people, even those that are not Orthodox, wherever he preached.
Proof of this honor prior to 1961, which refutes that which is claimed by the anti-Orthodox people, among many others, is what was written and published by two of the greatest personalities of our Church: Bishop Theofan Noli and the first canonical Archbishop, His Beatitude Kristofor Kisi.
Bishop Theofan Noli in 1947, in Boston, published the book “Kremtorja” ("The Feasts") of the Orthodox Church. In his introduction he says: “The translation … we made from Greek, with the exception of the hymns of St. Kosmas of Berat, which we paraphrased from the Albanian version by His Beatitude, Kristofor Kisi, Archbishop of Albania." And on pages 754-763 he gives the Church service for this saint.
So, Bishop Theophan Noli, in 1947 (which is before 1961) calls him Saint Kosmas of Berat and the service of the Saint is taken from a 1931 edition of Bishop Kristofor Kisi, who has written much about St. Kosmas.
So, for Bishop Theofan Noli and for His Beatitude Kristofor Kisi, Saint Kosmas of Berat was not an anti-Albanian, nor “not a saint”, as the anti-Orthodox gentry has been trumpeting.
The following are three documentations that show the honor and the old tradition of the honoring of St. Kosmas among Albanians:
- Fragments from the book of Bishop Theophan Noli, “Kremtore e Kishës Orthodokse”, Boston, 1947 (the Liturgical Book that we use today in Orthodox Churches of Albania).
- The cover of book of His Beatitude Kristofor Kisi for St. Kosmas, “The Biography and Service of the New Martyr and Equal to the Apostles Saint Kosmas”, Korçë 1931.
- The 19th century fresco of the Saint in the monastery dedicated to him.
Source: Fragments from the book “Kremtore e Kishës Orthodokse”, Boston, 1947. 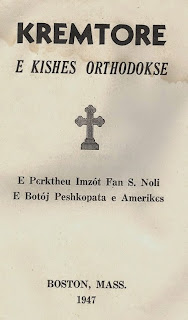 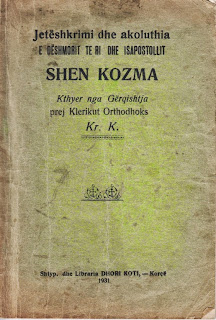 The cover of book of His Beatitude Kristofor Kisi for St. Kosmas, "The Biography and Service of the New Martyr and Equal to the Apostles Saint Kosmas", Korçë 1931.
John at 10:39:00 AM
Share
‹
›
Home
View web version