The First Church Dedicated to the Newly Canonized St. Porphyrios in Kenya 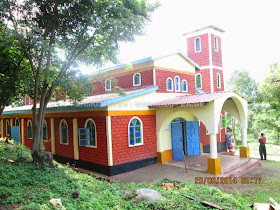 On August 29, 2014 the consecration of the first Orthodox Church dedicated to the newly canonized Saint Porphyrios of Kavsokalyva took place in Kenya by His Eminence Metropolitan Makarios of Kenya, with the blessing of the Pope and Patriarch of Alexandria and All Africa Theodoros II. It took place in a remote area for the tribe of Nadi amid huge rocks, mountains and lush tropical vegetation, and in the background is the famous Lake Victoria.
His Eminence and his entourage arrived early in the morning, although the previous day he had a little trouble with his health and had to spend a few hours in the hospital of Kisumu, where he was given the necessary medical care. The ceremony began immediately with the procession with the holy relics. This was followed with the anointing of the church with myrrh, and immediately after was the Divine Liturgy. Many clergy participated in this event, not only from the tribe of Nadi but also other tribes in Kenya. His Eminence, at the end of the Divine Liturgy, laid hands on Fr. Theonas Mounavis, a graduate of the Patriarchal School "Archbishop Makarios III of Cyprus", to make him a spiritual father.
It is to be noted that the current number of consecrations of churches done by His Eminence has surpassed the number of 115 in the Metropolis of Kenya alone since the time he was made Bishop in 1992.
His Eminence was very moved over the fact that the church was packed inside and out, almost shocked, and he revealed to all his spiritual affinity that bound him with St. Porphyrios, since he would confess to him in his student days. He described this event as a blessing and a miracle from God, through the intercessions of His Saint. He stood for a while and stressed the importance for modern saints in our lives, giving evidence from the personal experiences he had with St. Porphyrios, from the time he was studying in England. He was one of the modern saints who foresaw his future journey within the Church, especially his mission in the African continent. His Eminence thanked God that he was led to be near the Saint in the difficult time of his student years. To the priests and parishioners he stressed that today's ceremony of consecration blessed the entire region.
Source: Translated by John Sanidopoulos. 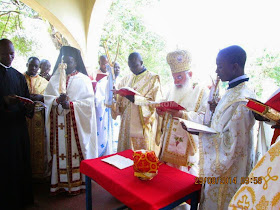 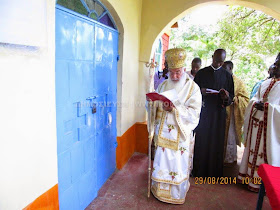 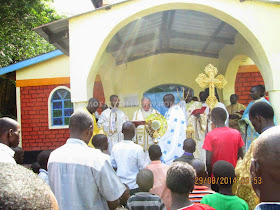 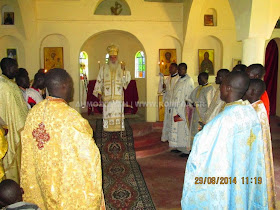