Saint Nektarios and the Roman Catholic Church (2 of 2) 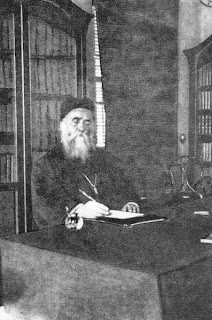 ...continued from part one.
He then proceeds to the institution of Synods as an expression of the unity of the Church and the Churches, which is very important. The Saint records what we see in contemporary Orthodox theology and ecclesiology. The Churches that were all complete and catholic in themselves, allowed themselves out of deliberate love to subject themselves to the institution of the Synods. He very much celebrates the Synods and refers to texts like Polycrates of Ephesus and the Epistle of the Synod of Carthage in 418 to Celestine of Rome, where it is stressed that "God did not give only one community [a church] or one person the grace of the Holy Spirit, but to all who believe and are united in the name of Christ and are gathered at the Synod."
In his work The Ecumenical Synods of the Church of Christ, our Saint deals extensively with the divinely gathered Synods of the Church, of which we will mention only the following: the Ecumenical Synods had as a criterion not one pontiff, but the Holy Spirit and truth.
[...]
Our Saint then goes on to the period of Saint Photios. The Saint has written many things about Saint Photios. There was a grave error of historians who said that a second Schism had taken place in the time of Photios and eventually he was never restored, but the Saint found documents and published them well before Francis Dvornik that Photios was restored to the unity of the Church, which continued until the time of the Crusades.
[...]
Saint Nektarios sees the great evolution of the papacy in the West within the Pseudo-Decretals, in the Donation of Constantine, the Pseudo-Isidorean Decretals and the Decretum Gratiani of the 11th century, which exceeded all the limits for the evolution, because they came to guarantee the support for the super-novel papal primacy and the institution of the papacy that has entered into the consciousness of the West, while in the East they did not pay much attention to this cultivation.
Saint Nektarios goes on to speak about papal infallibility. He proves that the Pope is anything but infallible, such as, for example, Bishop Callistus of Rome in the third century who was a Sabellian, and he underscores the danger of Sabellianism even as far as the issue of the Filioque, which he underscores as a "Semi-Sabellianism", which Saint Photios also said in his Mystagogy on the Holy Spirit. In other words, it is an accentuation of the oneness of God's essence over the three Persons and the Monarchy of the Father.
In the fourth century we have the case of the non-infallible Pope Liberius who signed as an Arian.[...] We also have the case of Pope Honorius in the seventh century, who was condemned by the Sixth Ecumenical Synod as a Monothelite heretic, and this was accepted by his successor Pope Leo II in 682-683. Therefore there is neither a theological nor a historical underpinning showing that the Pope is infallible.
The Vatican Council (1870) very much stressed the infallibility of the Pope to the point that it said the Pope even "without the Church" and "without her consent" is infallible ("ex sese et non ex consensu Ecclesiae"). Although Saint Nektarios does not state that the Pope abolishes the Church with the Vatican Council, he writes beautiful commentaries in his work On Ecumenical Synods. It is characteristic that the Saint is neither dominated by zeal nor by indifference. And in our time, today, we must be very careful on these points so that the view is not cultivated that only the zealots are evil and have no love. Because even the others, the so-called Ecumenists, do not have true love when they speak of love without a love for truth. This polarization is not good.
Saint Nektarios emphasizes that love is everything. Dogma is not enough. If one hates a heretic, his spirit and disposition is to blame. The Saint, without abolishing love, considers papal ecclesiology as some sort of philosophical institution, a philosophical theory that accepts God as the Creator of the world, but not as a Superintendent. The Papal Church puts Christ Himself in second place. This has been emphasized by the entire Orthodox Church within the epistles of the Patriarchs of the East, and it was also emphasized within Serbian theology by Fr. Justin Popovic. The Pope displaces the Church as the Body of Christ and the Communion of the Holy Spirit, and he comes to dominate, while Christ can be found somewhere behind, and the Holy Spirit does not have His central divinely-prepared place. Florovsky said that the ecclesiology of Rome is indeed flawed, but even more so their Christology. And Saint Nektarios, without saying it word for word, means it: how their repelling of Christ and replacing Him with the Pope is a denial of Christ as the Origin and Head and Cornerstone of the Church, as the Firstborn among many brethren.
[...]
The completion of the Schism eventually took place with the imposition of the Crusaders, especially in the Fourth Crusade, when the Orthodox Hierarchy was displaced with violence. This is why Peter of Antioch in the eleventh century, whose spirit Saint Nektarios praises, went to pacify Cerularios referring only to the problem of the Filioque and the primacy; and while the West continued the synodal tradition in Piza, Constance and Basel, Florence brought an end to this, because it abolished synodicity and ordered the papal position. The synodal tradition did not hold up in the West, because a characteristic of a true Synod is not only that it is faithful to previous ones, but that they are accepted by the Church, from the living body, the people of God. Saint Nektarios writes:

"The issue of the primacy of the Pope is the main issue of the Schism.[...] The Schism took place due to the requirement by the Popes of submission from the Universal Church, the one, holy, catholic and apostolic Church, to the Bishop of Rome. In this lies the cause of the Schism, which is truly very great, because it subverts the spirit of the Gospel, and the most important words of dogma, for it is a denial of the principles of the Gospel."

He concludes it is a denial of the principles of the Gospel and a denial of the synodicity of the Church. Christ organized His Church and the Pope overturned it, making it poor and unilateral, into his autocracy. It is a denial of the Body of Christ itself, its Spirit-guiding reality, and that Christ is its Center and Head.
The texts of the Saint are very important. They are not written with hatred, but they are an expression of the love and care of Saint Nektarios and came from an important study, from a man who truly wanted dialogue:

"Through the dogma of infallibility the Western Church has lost its spiritual freedom, its adornment, it has been profoundly displaced, deprived of the riches of the grace of the Holy Spirit, the presence of Christ. From a spirit and soul it became a speechless body.[...] I heartily grieve from the depths for this injustice to the Church.[...] I pray that the mind and heart of His Beatitude the Pontiff will be illumined by the Holy Spirit, that he will give honor to the Holy Catholic Church, which he deposed as if it was not beneficial."

The pain of the Saint is great for the fall and non-repentance of Rome. He says in his book: "As they have placed primacy in the first place, the authority of Peter, I wish they had the repentance of Peter in the first place that the Gospel may be fulfilled, for the Church to truly be evangelical."
Saint Nektarios dominates as an example of a serious scholar, a man who has no hatred, has discernment, and who is pained by the loss of Rome, which Saint Gregory Palamas resembles to the fall of an elephant, which when it falls it cannot get up on its own. He expressly says that either we must sacrifice what we have from Christ and the Holy Apostles, or the Pope must sacrifice who he is, with the innovations to the faith such as the primacy and the infallibility. The Pope, says the Saint, has done us a favor by compelling us to remain in our doctrines, our customs and our vitus Bizantium. With these thoughts he gives us something we have no need to be given, since our Church, the Apostolic Church of God, would lose its freedom.
However, the Saint is in pain over the fact that the Orthodox Church cannot leave its basis, from its guide to truth and the Comforter of the Church, the Most Holy Spirit. Near the Saint one feels confident. Because he lives the truth of Orthodoxy, and this is why he could take the appropriate steps towards the West. If Saint Nektarios was with us today he would participate in dialogues even though as an active prelate he was repulsed, even without any repentance on the part of his persecutors.
The generosity of Saint Nektarios towards the Roman Church is apparent, but he goes only so far as that which does not betray what is not his own, for he does not have the right to betray it because they belong to Christ. If he did, it would be as if he were betraying hope and the salvation of the world itself, which is the Truth of God, the Church of Christ, the grace and eternal life of the Holy Spirit. With Papism, writes the Saint, "the Church is in danger of going from the One, Holy, Catholic and Apostolic Church, to a Roman or rather Papal Church, declaring not those things that came from the Holy Apostles, but rather papal doctrines." And he adds in the end:
"May God judge between us and them."
Source: From the book Saint Nektarios: Spiritual Father, Monastic Ecclesiastical Leader. Proceedings of the Inter-Orthodox Theological Scientific Conference on the Fifty Year Anniversary (1846-1996) of the birth of St. Nektarios of Aegina, 21-23 October 1996. Translation by John Sanidopoulos.
John at 12:31:00 PM
Share
‹
›
Home
View web version