The Theology of the Icon 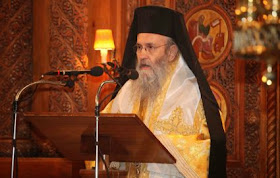 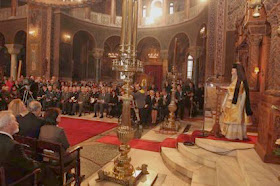 Your Beatitude,
Orthodox icons are a deep, theological, empirical, dogmatic book, and, when one penetrates into it, they can perceive not only what the Orthodox Christian God is, but also what is His Church and what is the meaning of the life of man.
The Orthodox Church is the glorified and deified Body of Christ, it is the place where all meet, angels and humanity, reposed and living, rulers and subjects, Clergy and laity, men and women, native and foreigner, it is the spiritual bridal chamber of glory, it is the property of divine eros. The Orthodox icon shows that the life of man is not determined by the material economy, but is given meaning by the divine economy, giving hope and perspective.
The Church is not owned by anyone and nobody can claim it and exclude others, but it is open to all the humble, who are distinguished by the cry of the publican, and at the same time it is closed to the Pharisees and the hypocrites who think they are in the Church. The Church is not a place for competition or the prevalence of certain groups, but a unity of persons, a place of testimony and martyrdom, silence and prayer, crucifixion and resurrection and Pentecost. The Church is not confined by walls and a roof, nor is it expressed by non-transformed people, who deal with the foreground and the background and have a knowledge about God, not knowledge of God. But the Church is expressed by the Holy Prophets, Apostles, Fathers, Venerable Ones and Martyrs, who are completely illumined, they are the "sunshine" of the Church.
The Orthodox icon, as an expression of Orthodox dogma and the inner brilliance of the Orthodox Church, scatters love and affection, peace and tranquility, and attracts those who are in pain and thirst for the righteousness of God, heralding the final sovereignty of the God of love, showing the transfigured world, the new creation.
God was manifested in the flesh, the Church is glorified as the Body of Christ, the icon is an expression of the transfigured life and the renewal of creation, Orthodoxy is the hope of the hopeless, the plenitude of the dispossessed. The Church rejoices today, and is glad with the glory of Her Bridegroom, and the sacred icons are the brilliant ornaments of the bridal chamber of this glorious Bride of Christ.
So, blessed are all those who love the glory of the Bridegroom and the Bride and live in the bridal chamber adorned with glory, dressed in the garment of gladness. Blessed are all those who participate in the supper of the Kingdom, which is shown in the sacred icons and is tasted in the sober intoxication of the Spirit, from which exudes fragrant incense. Blessed are all those who enjoy the glory of Orthodoxy, not once a year, but every day, whoever participates in the thrice-holy hymn of the angels and the song of the redeemed.
Source: Ekklesiastiki Paremvasi, "Η θεολογία τών εικόνων", February 2010. Translated by John Sanidopoulos.
John at 2:33:00 PM
Share
‹
›
Home
View web version