Sick Catechists: A Concern In Catechism 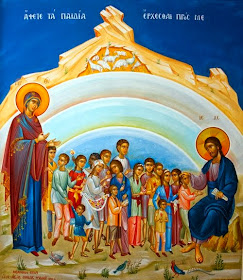 By Metropolitan Hierotheos of Nafpaktos and Agiou Vlasiou
In the recent gathering of Hierarchs of the Church of Greece (02/21/2013), His Eminence Metropolitan Paul of Sisanion and Siatista suggested the theme "Concerns In Catechism" with knowledge and arguments, in a lovely and nice way.
Catechism is an important work of the Church that takes place prior to Baptism as well as after. It is an initiation into the life of the Church and pursues the development of the spiritual life, so that a person reaches "unity in the faith and in the knowledge of the Son of God, unto a perfect man, to the measure of the stature of the fullness of Christ" (Eph. 4:13), ie deification. The work of Catechism deals with all ages, young and old, men and women, the wise and the illiterate. Essentially Catechism is the pastoring of the Church.
Let us look at the subject of the Catechism of young people as it took place in the past, which contained positive and negative elements. The positive is that it helped many young people to come to know the Church, to connect with Her and grow spiritually and ecclesiastically. Many of today's Clergy of all ranks have gone through Catechism School and have been helped in many ways. However, there are also negative elements when children are not offered Orthodox Christian Catechesis, but Protestant ideas and moralistic teachings. We have met many people who have expressed as unfavorable those years they went through in Catechism School.
It should be noted that a basic and central element of Catechism is the person catechizing and teaching, the one who "bears the Catechism". When the Catechist has no ecclesiastical mindset, then they instill in children poisonous drops that have dramatic consequences later in life. When food that is offered is tainted, then it creates turmoil in the physical body. The same is true with spiritual food that is offered, when it is adulterated by something foreign to Orthodox teaching and tradition. Experience has unfortunately taught us that immature Catechists, using their role assigned by the Church, by the local Bishop, have given poisonous foods to children, made them their own fans and followers, and given them anti-ecclesiastical ideas and principles, making them ecclesiastical janissaries and creating cancerous constructs within the bosom of the Church. Spiritually sick Catechists have dispersed anti-ecclesiastical and anti-episcopal ideas, and have dragged children outside of the true spirit of the Church.
If we look carefully, we will find that where there exists within Metropolises and Parishes "revolts", "anarchist events", "impious actions" and other such things; it is due to such immature catechetical efforts. Some sick Catechists and Clergy exploit the zeal of a child, as well as various religious institutions, such as monasteries, to become nurseries of rebellion, fanaticism and hooliganism. Usually such efforts are aimed against an episcopal throne, when they could not understand him, so they fought him with hatred and fury.
Certainly, in this case it was not due to the Church or the blessed institutions, but to sick people, ecclesiastical schizophrenics, both Clergy and laity, who betray their mission, and operate in the Church for their own interests and fight against Her. These people "molest" the Body of the Church and "rape" innocent children's souls. Only the power of repentance corrects such great ecclesiastical crimes.
Source: Ekklesiastiki Paremvasi, "Οι άρρωστοι Κατηχητές", February 2013. Translated by John Sanidopoulos.