The Celebration of Christmas (3 of 5) 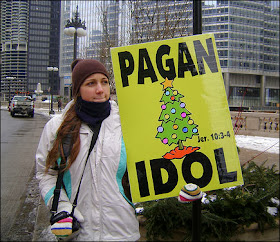 Continued from part two...
3. Pagan Origins?
We will consider first the objection that holidays in general (including Christmas) have pagan and non-Christian origins, and that they are accompanied by actions such as drunkenness and prostitution.
It is true that it may seem some holidays may coincide at a time when ancient peoples celebrated their own holidays. It seems also that supposedly these holidays have origins related to idolatrous and pagan customs and manners and actions. However, it is also true that there are a lot of things that have their origins in paganism and we make use of them. One example is our calendar! The month of January, for example, is named after a particular ancient god. August is an honorary title for a pagan emperor. Many times, there are couples who celebrate their wedding anniversaries, but this was done by couples among ancient peoples who were pagans. These are in use by even the so-called Jehovah's Witnesses. Even marriage rings have pagan roots. There are other similar symbols used by people for their everyday business. Perhaps we have to sort through all the small and big things to find out what is their origins and roots, and in this way we can reject them? Is this the aim of our Christian journey? Perhaps this may bring to mind the Pharisees who "strain out a gnat but swallow a camel", looking to find what is clean and unclean? Is this the goal of our salvation?
At this point the Watchtower Society says: "No, we need to have a balance", and there is an article in the magazine Awake from 22 December 1976, on pages 12-15, that makes a very specific reference to this: "The fact that other religions can use certain things that are of the nature God created, and use them as symbols in the worship of idols, does not mean that these things are prohibited for true worshipers, who use them differently." Anyone who visited the Temple of God built by Solomon, could perceive that the worshipers of God did not worship the embellishments that decorated the walls. Therefore, a Christian needs not to primarily focus on a certain symbol, and think what this could mean and what it meant thousands of years ago, or how did they consider it on the other side of the planet. Rather they should focus on WHAT IT MEANS NOW, for most people, among whom Christians live. This is what the magazine Awake said in 1976, and the Watchtower Society stated the same thing on May 15, 1972. If an object is an idol or not, it primarily depends on how one sees it.
This shows something very basic. The Watchtower Society stresses that:
1. Shapes and symbols per se are not necessarily bad if used today, even if at times they are used by pagans during false worship.
2. That it is a waste of time, and it is not necessary, to determine what every object on earth meant in the past and means today.
And here we see the inconsistency of the Watchtower Society. No Christian holiday celebrates ANYTHING that was celebrated by ancient pagans. And if a date of a Christian holiday coincides with a pagan holiday, it has no such significance today for us. Let us take Christmas as an example. Long before Christians began to celebrate the birth of Christ, pagans celebrated the sun on December 25th. It was the day of the winter solstice. It was for them a time in which they gave gifts and there was also debauchery. When Christians began to celebrate the birth of Christ, all these practices were replaced. The old holiday of Emperor Aurelius that began in the third century, the Christians made their own. Now what shall we say? That the current holiday is related to and a remnant of the ancient holiday? Do Christians mean today with the celebration of Christmas, what the ancient pagans meant? Perhaps it follows therefore that we worship the sun? No! For some it may indeed be a time of debauchery. But this isn't the Christian message. For us, the glory of the Sun of Righteousness, who dawned on the world, our Lord Jesus Christ, who was born for us as man, has no relation with the honor that was given to the sun (the created sun) by its ancient worshipers.
Therefore, the Jehovah's Witnesses have confronted and contradicted themselves, as they have written in their official publications, that history does not characterize as worship an instrument used, but worship characterizes the instrument in the way it is used and performed. They say, therefore, that it is not necessary on the one hand to examine in detail the objects used, if it had pagan origins, and secondly that if one uses them in ways or methods in the worship of the true God, in a similar way they were probably used in the past by non-Christian peoples, this does not alter the performance of worship. Therefore, based on what they themselves have said, we can say that the holiday of Christmas, like every other Christian holiday, ascribes glory, honor, worship and praise to the true God, and therefore there is no need to examine or deal with the who or what or when in the past, when pagans probably celebrated on similar days their gods.
Translated by John Sanidopoulos.
PART FOUR
John at 3:46:00 PM
Share
‹
›
Home
View web version