Saint Theodore the Graptos, Who Was Branded With Twelve Iambic Verses

On this day we commemorate our Venerable Father Theodore the Graptos [or Branded], brother of Theophanes the Poet and Graptos.
Verses

Theodore has a great boast,
Having been taken from the earth, with a great mark to behold.
Saint Theodore together with his brother Theophanes (who is celebrated on the eleventh of October) lived during the times of Theophilos the iconoclast in the year 830. And both struggled greatly for the honor and veneration of the holy icons. Wherefore they were beaten without mercy. And according to the commands of Theophilos, with sintered iron there was inscribed on their foreheads the following iambic verses:
Πάντων ποθούντων προστρέχειν προς την πόλιν,
Όπου πάναγνοι του Θεού λόγου πόδες
Έστησαν εις σύστασιν της οικουμένης,
Ώφθησαν ούτοι τω σεβασμίω τόπω
Σκεύη πονηρά δεισιδαίμονος πλάνης.
Eκείσε πολλά λοιπόν εξ απιστίας
Πράξαντες δεινά αισχρά δυσσεβοφρόνως,
Eκείθεν ηλάθησαν ως αποστάται.
Προς την πόλιν δε του κράτους πεφευγότες
Oυκ εξαφήκαν τας αθέσμους μωρίας.
Όθεν γραφέντες ως κακούργοι την θέαν
Kατακρίνονται και διώκονται πάλιν.
All long to run to the city [Jerusalem],
Where the all-pure feet of God's Word
Stood as a support of the ecumene,
These men were seen in this revered place
Wicked vessels of superstitious delusion.
There due to unbelief
They did many woeful, shameful and ungodly-minded things
They were banished from there as apostates.
Towards the city [Constantinople] of the empire they fled
They did not abandon their lawless folly.
Thus they were branded to be seen as evil-doers
They are again condemned and prosecuted.
Having been branded with these verses, they were sent into exile, where the great most-brave and victorious Theodore departed to the Lord.
It is said that when this Saint reposed, a great Elder went to him, and heard holy Angels, together chanting spiritual songs. He chanted together with them. God showed through this song how much honor Theodore had by those attending him. 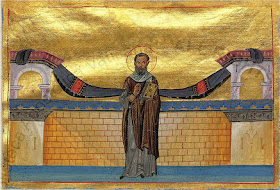 Apolytikion in the Third Tone
Signed with holy wounds, thou wast offered as a living gift to the Giver of life. For adorned with the gifts of thy holy struggle, thou didst shine as a noble confessor. Holy Father Theodore, intercede with Christ our God to grant us His great mercy.

Kontakion in the Third Tone
Father Theodore, thou didst venerate the icon of Christ and undergo persecutions, hardships and afflictions. Thou hast become a strong pillar of Orthodoxy; initiator in things sacred, we honour thee.

Read also: Saint Theophanes the Graptos, Who Was Branded With Twelve Iambic Verses 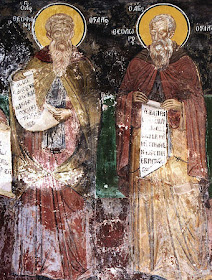