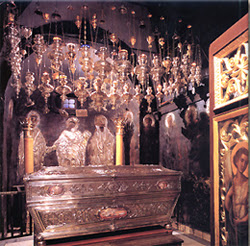 Hieromonk Gregory Valmes records a miracle of Saint Spyridon in a pamphlet he published in 1856. It reads as follows:
A woman by the name of Vasilo from Zagora, Epirus, the daughter of Constantine Simos and Christina Kyritse from the village of Vounou of Chemara, on the 13th day of July, in the year 1853 decided to go on a two-mile hike with several other women of the village, to gather firewood. Indigenous to this area is a wood that burns easily and it is used by the Greeks of Epirus because of its high resin content. Vasilo returned on the 16th of that month. Fatigued as she was from the trip and the heavy weight she had carried on her back, she sat down to eat her supper. Thus doing, she perspired profusely, so she bathed her feet and hands in cold water. Yet, the task was not completed when her left leg and arm stiffened, causing her unbearable pain. The pitiful woman grieved over this occurrence.
Many were her attempts during the next two years to find relief or escape from this condition. All treatments failed. Driven by terrible grief and despair, she resorted to a certain Turkish hodja for treatment. She spent a great deal of money, but to no avail; for she was deceived by him and remained in her incurable illness.
While leading this type of lamentable life, she obtained a separation from her husband with his consent and that of the Church. She had become a burden on herself, and for her relatives and friends, who by now had grown weary of taking care of a quadriplegic woman who was unable to attend to her personal needs. Thereafter, she gave herself over to mourning, tears and repentance. With a contrite heart, she implored the all-merciful God and His saints to forgive her sins and relive her of this crippling disease.
In December of 1855, she beheld in her sleep a cleric, who stepped on her withered foot, saying, "Do not write to thy brother in Kerkyra, as thou hast planned, but go in person." She was astonished by this, and out of curiosity asked, "Who mightest thou be?" The cleric answered, "I am the Saint thou hast besought many times." She was awakened by this vision and terrified. Vasilo related it to those in her house. They all agreed that she must do all those things she was ordered to do in the vision.
With burning faith, this unfortunate woman was resolved to make the journey. Vasilo was brought to the shores of Epirus in a large basket tied to a horse. In this manner, she was taken to Kerkyra where all were horror-stricken as they beheld her hopeless and incurable condition. She was transported from the shore to the Church of Saint Spyridon in a cart. Once there, she was placed on a chair and brought before the relics of the wonderworking Spyridon. There, she fell with inconsolable tears upon the Saint, imploring him unceasingly to intercede before the all-merciful and almighty God to grant her forgiveness of sins, eternal salvation for her soul and physical health.
Great is the Lord in His saints! The fervent tears of faith and the intercessions of our Saint and patron moved divine pity. Therefore, during the second vigil that she made lying near the relics of the Saint, at about midnight, she attained the health for which she longed. At that moment, Vasilo called the parish priest and proclaimed with tears of joy the miracle of Saint Spyridon. Afterward, she confessed with true repentance and compunction. At dawn, she walked unassisted before the Royal Gates and received the Immaculate Mysteries. Safe and healthy, she returned to her homeland. She glorified God and was acclaiming to all the great boldness the wonderworking Spyridon possessed before God.
From The Great Synaxaristes of the Orthodox Church: December. Holy Apostles Convent (Buena Vista, CO) 2003. pp. 542-543.
John at 5:57:00 PM
Share
‹
›
Home
View web version