Saint Spyridon and the Restoration of a Demonized Woman 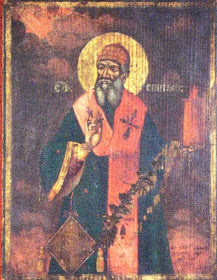 On Palm Sunday in the year when the memorable Nikephoros Theotokes (c.a. 1760), the luminary of the Church, taught in Kerkyra, recounting the diverse miracles of Saint Spyridon and commending his listeners to his protection, the following took place. Two weeks later, as he was speaking to a crowd of eyewitnesses to the Saint's miracles, the holy and grace-filled relics passed by in a procession. A certain possessed woman who foamed at the mouth and gnashed her teeth was brought forward. Even though she was bound hand and foot, two or three men were scarce able to restrain her violent behavior. Her face was disfigured and did not resemble that of a human. Her voice was altered and changeable, for at times she snorted like an ox, or barked like a dog, or even cried like a baby. Now they laid her on the ground, three times, so that each time the relics of the wonderworker Spyridon would pass over her (thrice to signify the Holy Trinity which the righteous one preached at the First Ecumenical Synod). Straightway - O the wonder! - the woman came to her senses, ceased wailing and spoke like a human being, no longer making strange noises. Therefore, they immediately untied her. She rose by herself and with tears in her eyes fell at the feet of the Saint, venerating and thanking the blessed one.
From The Great Synaxaristes of the Orthodox Church: December; Holy Apostles Convent (Buena Vista, CO) 2003 pp. 540-541.
John at 7:35:00 PM
Share
‹
›
Home
View web version