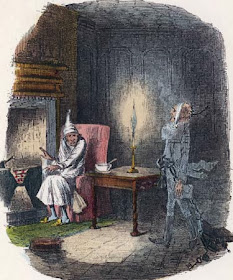 Charles Dickens writes in A Christmas Carol, describing the spirit of Jacob Marley when he appears to his business partner in life Ebeneezer Scrooge:
"Scrooge had often heard it said that Marley had no bowels, but he had never believed it until now."
This is a reference to 1 John 3:17 - "But whoso hath this world's good, and seeth his brother have need, and shutteth up his bowels of compassion from him, how dwelleth the love of God in him?" (KJV)

In other words, those who are rich in this world, and see others in need while having no compassion for them, do not have the love of God.

By saying Marley "had no bowels", this is essentially what they were saying, but when Scrooge saw the ghost of Marley he saw that this could be interpreted literally as well.