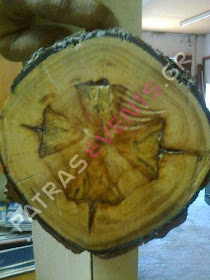 September 14, 2013
Patrasevents.gr
The story of the cross in the pine tree over the past three days has been learned throughout the village and spread from one person to another.
Last Thursday, September 12th, a resident of Krini (Northern Greece) while cutting wood was caught by surprise. While he was trying to cut the trunk of a pine tree, the machine he used to chop the wood began "turning".
The trunk would not cut, no matter what the effort! Meanwhile he tried to cut other trunks with the same machine and it worked normally. He then tried again several times, but the result was the same!
This wood, as he told Patrasevents.gr, he was not able to "rip" out. When he looked closer he saw the image above. A cross was engraved in the wood!
As much as he tried to explain the incident logically, he was not able to. In the evening at the cafe he told all his neighbors what happened, and he approached the priest of the area who replied that it is the will of the Lord for the trunk to not be cut.
The older people are mainly talking about a miracle while this particular man is keeping the wood in his house and he is guarding it like the "pupil of his eye".
Translated by John Sanidopoulos.