St. Silouan the Athonite and the Earthquake of September 14, 1932 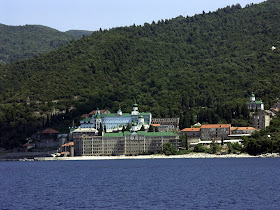 On the 14th September 1932 there was a violent earthquake on Mount Athos. It took place at nine o'clock in the evening during Vespers on the eve of the Feast of the Elevation of the Holy Cross. I was standing in the choir near the Father Prior's confessional, and Father Prior himself was standing outside the confessional beside me. Inside the confessional a brick fell from the ceiling and there was a shower of plaster. At first I felt a bit frightened but I quickly reassured myself and said to the Prior, "See, the Merciful Lord would have us repent." And we looked at the monks in the church and those in the choirs, and very few of them were alarmed - about a half dozen left the church but the rest remained where they were, and Vespers continued in the usual way, as quietly as if nothing had happened. And I thought to myself, "What an abundance of the grace of the Holy Spirit abides in these monks that they can remain calm while a terrific earthquake shakes the whole of this huge monastery building, raining down stones and mortar, setting chandeliers and icon-lamps swinging to and fro, making the bells in the belfry ring and even the biggest bell of all toll with the violence of the vibration!" And I thought, "The soul that has come to know the Lord fears nothing except sin, the sin of pride, in particular. She knows that the Lord loves us, and if He loves us, what have we to fear? The Merciful Lord is speaking to us for our understanding: 'My children,' He says, 'repent and live in love. Be obedient and sober, and learn meekness and humility of Me, and you shall find rest for your souls.'"
From the book Saint Silouan the Athonite by Archimandrite Sophrony, PP. 473-474.