Pontian Customs for the Day of the Cross 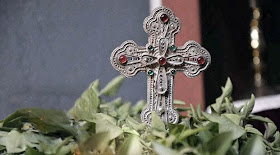 The Feast of the Exaltation of the Honorable Cross on September 14th was one of the biggest feasts in Pontus, which is why the month of September was called "Stavrites" (month of the Cross).
It was a day of fasting with labor prohibited. The day prior the housewives would prepare the "foods" of the Cross which were fasting foods made without oil, since according to the Orthodox religion the day of the Cross is a fasting day with no oil, unless it fell on a Saturday or Sunday, at which time they did eat oil.
On the day of the feast the entire family went to church. The place was fragrant with basil, which according to tradition was the scent that led to the finding of the Honorable Cross.
At the end of the Liturgy they would take basil from the hand of the priest and brought it home for a blessing. They placed it near the icons and every time they burnt incense they would put a leaf of basil into the censer.
With one strand of basil the housewives would prepare prozimi (sourdough bread without yeast) in order for it to be used for a prosphoron (offering bread).
At noon the entire family gathered at the table where they ate the "foods" of the Cross.
Source: Translated by John Sanidopoulos.