Muslims Who Built An Orthodox Chapel and Venerate Icons 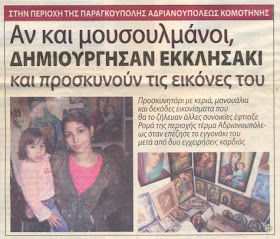 By Anthony Oureilidis,
Student of Theology at the University of Thessaloniki
Within a slum, between houses with bricks, concrete blocks and plates, in an alleyway that barely fits a man to pass through, in the tiny courtyard of a Muslim resident of Adrianople, we will see the power of faith and their love for St. Irene Chrysovalantou, to whose honor they built a chapel.
It is small and humble, but done with much love and devotion by the people of this family, who did this to thank her grace for having seen, while praying to her, their granddaughter survive a very difficult heart surgery.
All of them are Muslims and even faithful and devoted to Islam, however, they found the venerable figures of the Saints to be balm to their souls, so they generously show their affection. The case of Gkarip is known to the neighborhood where residents led us, especially the young children, from the main cafe who knew his faith and vow to build a church, which all in the surrounding area respected him for. They are themselves Muslims according to their beliefs and traditions, but they completely believe in the power of the Panagia, Irene Chrysovalantou and Saint George.
At this unusual church there is no empty square centimeter without an icon. All come from a certain monastery, a certain chapel, and some were bought in Tinos where the family of young Zeinep goes almost every summer, like many residents at the end of Adrianople.
There is an area to light candles where there are also lamps, while, as the neighbors say, people go there crawling on their knees when they want to ask for something, and with great religious solemnity usually their requests are answered and they feel more gratitude, which is why they keep coming back. 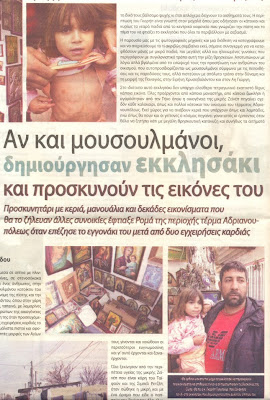 It all began with the health predicament of the young Zeinep who is the daughter of Tayfun and Sibel Recep, whose young one was saved after her grandfather saw a vision. Mr. Gkarip Yusuf talks about the dream he had, in which a voice told him to build a church that the young one may be saved. "When we took the child to Thessaloniki for the first surgery, the child was in a bad situation. The second surgery later took place in Athens, Saint Irene helped, and now all things are going well. Now she is 15 years old and the child will have a surgery when it is needed."
"What kind of surgery did she have?"
"Heart surgery, which was a failure. It was a major surgery for the child, but now all is well."
"We see here many icons. Do the people bring them?"
"People, ours from here, came from Athens, and people from the neighborhood continuously come and bring icons, seeking help. The monastery helped people very much."
"We see icons of all the Saints: Saint George, Saint Christopher, Saint Demetrios, the Archangels, Prophet Elias, Kosmas Aitolos, Saint Stylianos, the Mystical Supper, the Panagia."
"I had so much more, but we collected them and handed them over to another chapel. And people bring them continuously. If you come some other time you will see people coming on their knees. This happens when the Panagia comes to your dreams. The people believe. And I certainly believe. I am a Muslim, and I don't mind being a Muslim. Saint Irene Chrysovalantou simply did a miracle. She saved my granddaughter."
One of the more regular visitors, Mrs. Faize, says that regardless of her being a Muslim, Saint Irene still helps.
"We come and light candles for our children when they are sick, we bring them here, they kiss the icons and they are made well. Whatever you ask you can do. I, glory to God, know that many people come and are helped. And this is always good."
Another Muslim woman says of the shrine: "I went there and supplicated for my granddaughter to be given a girl. It was given. The second time I came here to the monastery that a second girl be given and not a boy. The second also was a girl. For the third she said to me: 'Grandma, you go again, because she believes you.' I came, I supplicated and I lit a candle, asking for my granddaughter to be given a boy, and it was given."
A more typical case is a woman who took ten years to bear a child. "She sees the Panagia in her dream who tells her to go and say it. She will come on her knees, make a supplication, and light a candle, and all her sadness will pass. And in fact the woman gave birth and the child received the name of the Panagia, which in Turkish is 'Myriam'."
As we sat there, the stories we heard were many and proportionate. We wondered if a priest had come here where the people felt the need to express their love and their faith, and where they placed their hope on some Christian Saints and the Panagia herself.
We see the wonders which the Lord our God works "who wants all men to be saved and come to the knowledge of the truth" (1 Tim. 2:4). Perhaps these events are a response to those who ask what will happen to those born Buddhists, Muslims, or any other religion that is not Christian. God ensures for all.
Source: «Ο ΧΡΟΝΟΣ» της Κομοτηνής (10/1/09). Translated by John Sanidopoulos.
John at 9:43:00 AM
Share
‹
›
Home
View web version