Hell in the Land That Speaks the Language of Christ 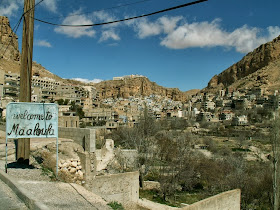 Aimilios Polygenis
September 26, 2013
Crime.gr
In Syria there are not only victims of a civil war that seems to have no end. The people of Assad and the rebels are not the only ones fighting. There has manifested in Syria another war, even if it is indirect - the religious one.
In the ancient Christian city of Maaloula, Islamic organizations with ties to Al Qaeda have begun a war in this land for a while now. And though Christians may not be their direct target, they have become on a daily basis "collateral damage". Nobody cares about what will happen to them.
Until recently Maaloula was one of the safest places for Christians in Syria. It was one of their few shelters. And although the Syrian forces have achieved major victories, the area - as if it is paying for some unknown sins - does not seem to bring peace.
"We are going through hard times. May God protect us," came from the stammered lips of a nun in the Monastery of Saint Thekla, one of the two oldest Monasteries in Maaloula where forty Christians are trapped.
The new Patriarch of Antioch has appealed to all: "Help those who are trapped in the Monastery of Saint Thekla." Months ago his brother was kidnapped and his whereabouts remain unknown. Today he lives the agony of Christians who find themselves trapped in the Monastery due to the heavy fighting outside between the rebels and the regime.
In Maaloula, one of the earliest cradles of Christianity, images reveal something that has nothing to do with Christianity. And certainly not the love taught by religion. There where they still speak Aramaic, the language of Christ, hell, unfortunately, is much closer.
Translated by John Sanidopoulos.
John at 12:19:00 PM
Share
‹
›
Home
View web version