A Confrontation Between Eugenios Voulgaris and Voltaire 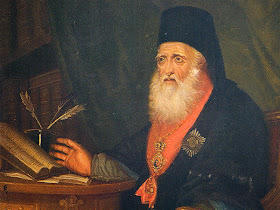 By John Sanidopoulos
Archbishop Eugenios Voulgaris (1716-1806) was the greatest Greek scholar of the 18th century, whose fame crossed the borders of Greece into Europe. In 1771 he left Constantinople and settled in Leipzig, due to a disagreement with Ecumenical Patriarch Cyril Loukaris.
King Frederick IV of Prussia admired the knowledge and wisdom of Voulgaris, and called him in 1772 to his court in Berlin to discuss such metaphysical questions as "Is there a hell?" and "Does paradise exist?". There, Voulgaris met Voltaire (1694-1778), a deist and rationalist who was among the famous thinkers of the French Enlightenment, and they discussed many theological and philosophical issues.
Both Voulgaris and Voltaire were invited to the royal dinner. Because that particular day was a fasting day in the Orthodox Church, a discussion on Orthodox fasting took place. Voltaire, who was a strong critic of the Roman Catholic Church, thought it ironic how such a wise and knowledgeable man as Voulgaris embraced such a superstition as fasting. A "confrontation" ensued. 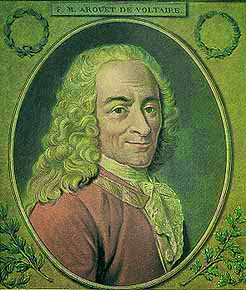 "I do not believe in paradises and hells," began Voltaire. "I enjoy my life like a party! I eat meat whenever I want, without fretting if it is Wednesday or Friday or Lent! On Sundays and feasts I sleep to my content, without being concerned with having to go to church! I make love with any woman I want, and I go to the taverns where I dance and frolic without the fear that I will go to hell, because I do not believe in such a fairy tale."
Eugenios Voulgaris then responded to Voltaire:
"You say that you enjoy your life, because of this and that. But I also enjoy my life. When I eat fasting foods instead of meats on Wednesdays, Fridays and during Lent, and when I wake up and go to church on Sunday mornings and feasts, my soul is filled! When I pray for this or that reason, my soul rejoices! So what is the difference between us?
I doubt that you have peace in your heart. Let alone the fact that you are tormented by the nightmares of hell! Well? Is this what it is to live? And if after death there does exist a paradise and hell, woe to you! You will lose out in the other life as well! And even if after death there is no paradise and hell, I will still come out the winner! I win in this present life! I enjoy it! Neither does anxiety eat me up about what happens after death. Well? Who is the most fortunate? I who believe in eternal life, or you who do not believe?"
Voltaire had no response.
John at 11:38:00 AM
Share
‹
›
Home
View web version